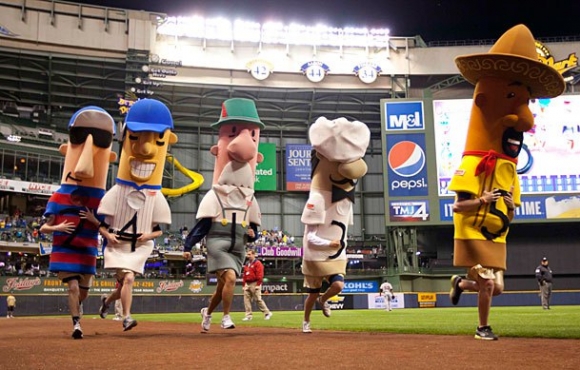 The Milwaukee Brewers came into existence because of a shady, late night, handshake deal orchestrated by current commissioner Bud Selig.

Since the Braves left for Atlanta in 1966, The German Athens of America was left without a baseball team, so Selig targeted the Seattle Pilots, an expansion team that only came to life in 1969.

Since acquiring the Brewers, Selig has made them switch divisions, AL East to AL Central in 1994; switch leagues, AL to NL in 1998; watch the 2002 All-Star game end in a tie, much to the chagrin of fans; and appoint his daughter as president of baseball operations, which caused fans to further view the team with more cynicism than they already had, which included suffering through 25 seasons between playoff appearances.

Recent history hasn’t been too kind to the Brewers, either, as starting OF Ryan Braun served a suspension for PED use and took the A-Rod approach by flat-out denying any involvement. This caused the test handler to get fired, which wasn't cool, and then Braun found his name on a ledger in the Biogenesis investigation, which wasn't wise.

2014 isn’t expected to get any better as Milwaukee is probably the fourth-best team in the NL Central. Competing in the same division as the Cardinals, Reds, and upstart Pirates is detrimental to success. They don’t have the Astros to beat up on anymore, since Selig made their new owner agree to move them to the AL West. The A’s, Angels, Mariners, and Rangers now get that honor.

Moeller was the full-time catcher in 2004 but Gary Bennett also saw significant time behind the plate. We’re going to use Moeller because of the way modern catchers are used. Gone are the days of catching 150+ games, as the demands of the position demand resting as much as Garfield the cat.

I was waiting for Mr Brock to make an All-Snark team, and he's an excellent choice for the Brew Crew. The puzzling stat is those 16 intentional walks. Were pitchers thinking, 'Hey we need to take the bat out of his hand and pitch to Rob Deer instead'? Surely, they wouldn’t want to pitch to Paul Molitor or Robin Yount. I could understand if each of those players had 16 IBB’s, but Brock? It’s a head scratcher.

The Brewers were just entering their fifth year in existence -- sixth if you count the Pilots -- so they were basically an expansion team at this point, and fan favorite Jim Gantner had yet to join the lineup. After watching Garcia boot 23 balls around the infield, manager Del Crandall couldn’t wait to get a 2B as good as Gantner. Robin Yount came up as a shortstop, so his choices were limited, much like Garcia’s range.

The Brewers lost the 2011 ALCS to the St. Louis Cardinals in six games, so this was the closest they’ve come to tasting the World Series since they lost to those same Cardinals in 1982. How could two NL teams meet in the Fall Classic, you may ask? Remember what I said about the Brewers switching leagues? Ryan Braun had more to do with Milwaukee making a deep playoff run than McGehee and his 19 grounding into double plays.

Hall of Famer Robin Yount played 20 seasons in Milwaukee, so there weren’t as many good candidates for the All-Time Snark team as some other positions. By the early 1970’s, teams were definitely working on fielding ground balls before games so it’s pretty astonishing that Johnson would still make 25 errors in 1973. This was one season before Yount came up as a 19-year-old phenom, and Brewers fans were treated with greatness until his retirement in 1993.

Gotta love seeing Rob Deer earn a spot on another All-Time Snark team. Too bad he didn’t play longer for the San Francisco Giants; otherwise, he could be a three-time All-Snarker. Once again, Deer had more strikeouts than hits, and this was before players routinely struck out over 200 times per season in what is becoming the latest statistical trend in MLB. In the opening monologue, we recapped the tumultuous 2013 season the Brewers were forced to endure by losing OF Ryan Braun to a drug suspension. Well, when you have to replace a player of Braun’s caliber with Jordan Schafer, these are the results you get. May was still essentially playing for an expansion team, so we’ll cut him a little slack but gladly welcome him with open arms in the clubhouse.

Brabender gave Pilots teammate and controversial author Jim Bouton much to write about in his classic diary-style book: Ball Four. He was referred to as Lurch for his intimidating frame -- 6’4”, 240 pounds -- and thick glasses. Brabender actually set an expansion record with 13 victories for the Pilots in 1969, which stood until 1998. Clyde 'Skeeter' Wright had a tremendous amateur career, pitching Carson-Newman College to the 1965 NAIA World Series and in the process striking out 22 batters in one game. He never reached the same success in the bigs, other than throwing a no-hitter in 1970 and earning comeback player of the year honors, which means he was absolutely terrible in 1969. Bones was the Brewers all-star representative in 1994. However he was not selected for the team at Veterans Stadium the summer of 1996. Do you need me to explain why?

The 1987 Milwaukee Brewers won 91 games and would’ve made the playoffs under the current Wild Card format, so this makes John Henry Johnson’s season even more remarkable. Based upon his relatively low home run total, Johnson was just getting lit up like a Christmas tree with that .365 OAV and was having trouble finding the strike zone, walking more than six batters per nine innings pitched. Plus he has the cool distinction of having two first names. Potts teams with Bones to showcase how bad the 1996 Brewers were, even though they finished slightly under .500 at 80-82. All hitting and no pitching.

Turnbow made the All-Star team in 2006, which probably says less about the state of NL relievers than it does about his season. He should’ve been an All-Star the year before, when he saved 39 games with a 1.74 ERA. Perhaps this was his consolation prize, as he pitched one scoreless inning in the Mid-Summer Classic and earned a hold. The rest of his All-Star mates watched in horror as future HOF’er Trevor Hoffman lost the game on a Troy Glaus double in the top of the 9th. The Brewers were so impressed with Hoffman’s performance that he signed with Milwaukee as a free agent before the 2009 season; Turnbow was out of the league by then.

Milwaukee does have the coolest mascot in the league, Bernie Brewer, who glides down a giant slide in left field after every Brewers' home run. The sausage races are pretty cool, too, but it’s unlikely that former Pirates OF Randall Simon will ever be invited to be a celebrity sausage. That didn’t sound right.