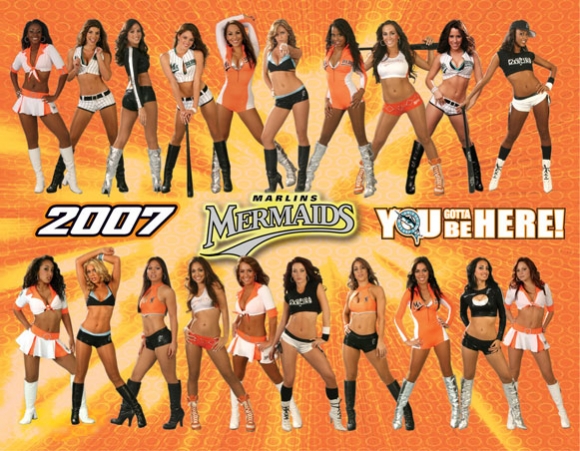 We’ve reached the halfway point in our All-Time Snark team reviews with a fitting squad in the Miami Marlins.

Here's a club that hasn't been around long but that provides many top tier candidates.

However I did expect this team to be worse. Much worse.

After winning its first World Series championship over the heavily favored Cleveland Indians, Miami found itself in the unusual position of owner Wayne Huizenga promptly shipping out every high-priced veteran in one of the most notorious fire sales in professional sports.

When they won their second title in 2003, a scaled down purging of salary and restructuring occurred, much like what will likely happen with the new Comcast-Time Warner merger. Ted Turner’s job is probably safe.

In 2012, the Marlins moved into a new stadium, completely revamped their uniforms, hired Ozzie Guillen as manager, became known as 'Miami' instead of 'Florida' -- taking a page out of the Angels' marketing strategy -- and actually acquired high-priced free agents like José Reyes, Heath Bell, Mark Buehrle, and added Carlos Lee right before the trade deadline.

How many of those players do you think still don a neon orange, light blue, bright yellow, and gleaming white Miami Marlins cap? If you answered zero, you are correct sir, or madam, or dude, or dudette.

Zaun was thrust into full-time catching duty after the Marlins pulled off a blockbuster trade with the Los Angeles Dodgers to acquire Mike Piazza for Gary Sheffield, Charles Johnson, Jim Eisenreich, and Bobby Bonilla. Zaun must’ve thought he was never going to see time on the field after the great Piazza joined the Fish. Well, in typical Marlins management fashion, they traded Piazza to the New York Mets less than a week later, freeing up catching duties for anybody who could attach their body to the catcher’s equipment. You honestly think the Marlins would spend money for properly fitting gear?

Jacobs is the selection at first base because he’s the first professional athlete in North America to be suspended for HGH use. Now, this was in August 2011, so there have been plenty of players testing positive for HGH since then; Alex Rodriguez comes to mind. It’s difficult to take those 32 HR, and 93 RBI seriously.

The Miami Marlins currently have a streak of four consecutive seasons under .500 and lost exactly 100 games last year, which makes José Fernandez's season even more remarkable. The current core features Giancarlo Stanton, Adeiny Hechavarria, and Christian Yelich. Notice Donovan Solano missing from that group? The Marlins brought in Rafael Furcal this off-season to play 2B. That’s how much confidence they have in Solano.

Lowell had a significant decline in production from his first six seasons in South Beach. Any coincidence MLB implemented the first round of drug testing in 2004? I’m not accusing Lowell of using steroids -- as many players' stats declined in 2005 -- but he did get traded to Boston and earn World Series MVP honors in 2007. Perhaps a change of scenery was all he needed.

Don’t confuse this version of Alex Gonzalez with Alex Scott Gonzalez, who broke into the big leagues with the Blue Jays in 1994 and happened to be born in Miami. Eerily similar, I know. In fact, baseball-reference.com ranks Alex Gonzalez as the third most similar player to Alex Scott Gonzalez, and they were the most similar players to each other from ages 26-33. Perhaps the web developers at baseball-reference.com are just as confused as we are.

How’s that for consistency? All three outfielder’s managed 28 RBI’s in their respective seasons, and for Dunwoody and Owens, those were compiled during two of the biggest offensive years in MLB history. Maybin makes this team more for his involvement in the Miguel Cabrera trade, and his 2010 season punctuated how dreadful that trade really was. The Marlins got nothing in return, as Andrew Miller never panned out, either. Maybin now plays for the Padres, and not very well, making this one of the worst trades in MLB history. It ranks right up there with Frank Robinson for Milt Pappas, Ernie Broglio for Lou Brock, and Steve Carlton for Rick Wise.

When the Marlins came into the league in 1993, along with the Rockies, nobody really expected them to be competitive, and they weren’t, losing 98 games. However, when the Marlins won the World Series in 1997, it had nothing to do with Pat Rapp. In fact, I expected that 1993 expansion team to be well represented on the All-Snark Marlins team, but so far, we only have Armstrong and Hough. Do you notice a trend with the seasons posted by the starting pitchers? Springer and Olsen were just a couple of years removed from the World Series teams, so the Marlins are about due for another cycle of being competitive, based upon those statistics. That is, if they can keep José Fernandez and Giancarlo Stanton together.

Here is a great spectrum of the Marlins franchise. Lewis was essentially still pitching for an expansion team -- the 1999 Marlins were victims of the roster purge the season before -- and Almanza was part of the 2003 World Series championship team. Our closer rounds out what has been a tumultuous existence of baseball in south Florida.

Bell was signed as a high-priced free agent prior to the start of the 2012 season, and he was supposed to be an integral part of the newly minted Miami Marlins, ushering fans into the new ballpark. It actually made sense, as attendance has always been an issue for this franchise. But it didn't work out. Bell is just the kind of player that would’ve been shoved out the door if he was on that 1998 team, and they essentially did that by trading him three weeks after the season ended to the Arizona Diamondbacks. He went from the top closer in the game to a castoff, as he was traded again to the Rays this off-season.

This team was further proof that you can’t just buy veterans and form a dream team and expect to win, unless you’re the 2008 Boston Celtics. Then it works.

This franchise is a mess, and if it weren’t for Rookie of the Year, José Fernandez, the 2013 Marlins could’ve rivaled the 2003 Tigers as one of the worst modern teams ever. Don’t expect 2014 to be much different; the NL East is one of the best divisions in baseball.

A brand new ballpark was supposed to change the perception and interest in the team, and dramatically increase attendance. Well, the fancy fish tanks, centerfield art projects, and new uniforms aren’t enough. You have to look like you care and trading Jose Reyés and Mark Buehrle less than a year after signing them to huge contracts is reminiscent of 1998, when Jeff Conine, Gary Sheffield, and Moises Alou were not traded for fair market value.

Owner Jeffrey Loria's approval rating is actually lower than Congress. Deservedly so, and that's saying something.