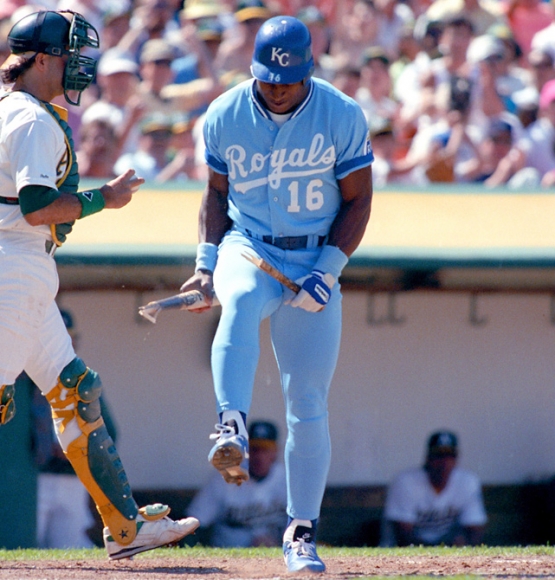 That was the magical year when the Royals came into existence, as MLB expanded four times that year along with the Pilots, Expos, and Padres. Kansas City received an expansion team because the Athletics moved to Oakland in 1968, and the undercapitalized Pilots ultimately moved to Milwaukee in 1970. Thanks a lot, Bud Selig!

Kansas City had a pretty good run in the late 1970’s, losing in the ALCS to the Yankees each year from 1976 to 1978.  The wonderful 1985 season brought KC their first, and only, World Series title, thanks to Don Denkinger’s blown call. You win some; you lose some; right Jim Joyce?

1985 also marked the last season the Royals made the post-season, the longest current drought in the majors. Although the Royals are expected to compete for at least a Wild Card spot in 2014, the AL is as tough as ever, and the kids are going to really have to step it up to understand what baseball in October is like.

As the leaves turn orange, let’s hope KC fans aren’t just showing up at Arrowhead for their sporting fix.

The catching position has been one of strength for Kansas City with players such as John Wathan, Mike MacFarlane, and Don Slaught, behind the plate that Sundberg is the best we could do. Throw in 91 K’s in 429 AB’s, and we’ve found ourselves the ideal candidate to handle the pitching staff. You’ll see why later in this article.

Now we see what happens when you analyze a team that wasn’t playing in the pre-integration era, when Herbert Hoover was President. Balboni was a slugger, no doubt about that, but it’s painstakingly clear that he should’ve been a full-time DH with those 18 errors at first base. I mean, seriously, how does a first baseman even get put into a position to make 18 errors in a season? Congrats to Balboni, though, for leading the All-Time Snark team in home runs.

White is an all-time great when it comes to Royals history, sandwiched somewhere between Kevin Seitzer and Amos Otis in terms of popularity. 1976 was just his third year in the league, so White had yet to gain his Gold Glove-caliber play. Even though Kansas City made the post-season this year, it didn’t have much to do with White.

Our infielders are consistent with each making 18 errors in their respective seasons. What is it with baseball and numbers? Schaal got to play for the Royals only because George Brett had yet to join the league. Was it a coincidence that Schaal’s last year in the league was 1974? I don’t think so.

No relation to Reds great shortstop Dave Concepción, but he is the cousin of former Pirates second baseman Jose Lind. Okay, that’s your random fact. Concepción was a member of the 1985 World Series team, but somehow, it seems Brett and Balboni were mainly responsible for the run production.

Motley was another member of the 1985 World Series team, along with Concepción, but when you match home runs and time grounded into double plays, that’s not good, in case you couldn’t figure that out for yourself. McRae got a job with the Royals strictly because of his father. Coleman finally got his leg dislodged from the tarp machine in St Louis to join the cross-state rival Royals, and with his legal troubles behind him from an incident where he threw a firecracker at a fan outside Dodger Stadium in 1993, he was set to have a bounceback season in 1994. However, the players' strike ended his quest for another stolen base title, and he was beloved in Seattle as part of the 1995 Refuse to Lose team.

José Lima was previously tabbed the ace of the staff on the All-Time Snark Houston Astros team and becomes the first pitcher to get that honor for two different clubs. When you have an ERA near seven, the term earned runs really applies. As you can see by the rest of the staff, the middle of the 2000’s was not kind to the Royals; they lost 100+ games in four out of five seasons. They inexplicably finished above .500 in 2003 when Angel Berroa won Rookie of the Year. The pitching staff didn’t have much to contribute to the success of the ’03 squad, nor did they the following eight seasons.

Besides Peralta and Marté’s astonishing rate of allowing home runs, the stat that really jumps out is Marté’s three victories. Was he just relegated to mop-up duty and happened to be pitching on days where the Royals mounted huge comebacks? Peralta gave up 15 home runs in 52 IP to put that dinger rate into perspective. He could’ve easily made a DL trip for whiplash watching all those balls leave the yard. If we were to create a Frankenstein-type All-Time Snark team, the Royals bullpen would definitely be our group of relievers.

There’s a name to challenge your friends to say three times quickly. Like his bullpen mates, Burgos gave up home runs faster than Sluggerrr, the Royals mascot who got sued for hitting a fan with a hotdog. In 2006, the Royals lost 100 games, and somehow, Burgos had the opportunity to rack up 18 saves. Their All-Star representative was Mark Redman that year, which foretells a team destined for Snarkitude. Looks like that bullpen gave Burgos save opportunities, but they were few and far between.

As the 2014 season gets closer, expectations for the Royals will continue to build for an October appearance. The Blue Jays are second, having not made the post-season since 1993. Something tells me Kansas City will be first to end that streak, as Toronto plays in the über-competitive AL East.

The Royals can always get reinforcements from the Omaha Storm Chasers.