The eighth wonder of the world was built specifically as the home of the Houston Astros.

It was the world's first domed stadium, ordered by Judge Roy Hofheinz to keep out the sweltering summer heat of southeast Texas. What we have, over 40 years later, is a pile of rubble, and that's not just a metaphor for the state of the roster.

At least their minor league system was just ranked the best in baseball by baseball expert Keith Law. Ah yes, the fruits of labor. Mark Appel might make the rotation out of Spring Training.

Astros fans can head to nearby Corpus Christi and cheer on the Hooks or take a road trip to Oklahoma City of the Pacific Coast League and cheer on the Redhawks. What? You expect these diehards to drive to Greeneville, Tennessee to watch some Appalachian League action? That’s a better drive than to Troy, New York to watch the 2013 New York-Penn League champions Tri-City Valley Cats.

What is a Valley Cat, anyway? Is that a feline with a venereal disease or one who smacks her chewing gum, twirls her hair, and says 'OMG' and 'BFF' a lot?

Ashby was actually a decent catcher during his career, but like most catchers, he found hitting pitchers more difficult than playing catch with them. His nine passed balls were good for third in the NL, and he actually led the league with 14 in 1980. We should cut Ashby some slack, as that was a pretty unique pitching staff with Nolan Ryan, JR Richard, Ken Forsch, and Joe Niekro with his trusty emery-board ball. Those 1980 Astros lost a heartbreaking NL championship series to the eventual World Series champion, Philadelphia Phillies.

Staub was actually a very good MLB player throughout his career, but being relegated to the cavernous Astrodome was detrimental to his output. In fact, catcher John Bateman led the team in home runs with 10. First base was held down for 15 seasons by future Hall of Famer and Killer B -- with Craig Biggio, Lance Berkman, and later, Chris Burke -- Jeff Bagwell, so there weren’t many contenders for this spot. Luckily for Staub, he was traded to Montréal before the 1969 season where he became the face of the franchise as Le Grand Orange and had his career year.

Now, Fazio only had 258 PA’s and played in 102 games in 1963, but he was the regular for Houston. A position dominated by players such as Craig Biggio and Joe Morgan, there weren’t many top snark contenders up the middle for Houston. As an added bonus, Fazio stole four bases and was caught an equal number of times, negating any productivity he brought to the diamond. How about those five RBI’s? Chances are they all came from the two home runs he crushed that year.

Hmmm, are you starting to sense a theme here? Yes, the 1963 Colt 45’s were terrible, but weren’t you expecting players from the past three seasons? I sure was. So there you have it, three quarters of the entire infield come from Houston’s second year in the league. Are you asking yourself if it can get much worse? The answer is yes.

And there you have it, the entire starting infield of the 1963 Houston Colt 45’s. Theseare typically the types of players expansion teams are forced to trot out onto the field as they scour the scrap heap for free agents and try one last gasp of washed up veterans (see the 1999 Tampa Bay Devil Rays).

Let's add one more player from that 1963 team, just for kicks, as Goss was a pioneer for free swingers of the modern game. Ironically, this was Howie’s last year in the league, and his first was the season before with Pittsburgh. It was a great run, kid. Kind of sad to see the Toy Cannon on the All-Time Snark team, as he was a force just two seasons earlier. Finally, we get a player from the horrid Astros teams of the past couple of seasons. But Bogusevic is now the Cubs' problem. I can’t wait to compile these rosters again next year to analyze and select new players to this team.

The late and charismatic Jose Lima would be the ace of this staff, as he won 21 games the year before. That’s a 14-game swing! Knepper was giving up home runs at an astonishing rate, considering he was still pitching in the Astrodome. Something tells me there could be a new member to the rotation in 2014. We can only hope.

Thankfully, Brunet reminds us of that tremendous 1963 season, since there weren’t many players from that team already. Ricky Stone was part of a playoff team that made a deep run in the post-season that ultimately lost to the Cardinals but got their revenge in 2005, even though Brad Lidge was tormented and traumatized by Albert Pujols, going “Choo-Choo!”  Speaking of Brad Lidge …

Lidge inexplicably lost control and focus in 2006, mainly because of the home run he surrendered to Pujols in 2005:

The 2005 World Series itself didn’t go so hot for Lidge, either, as he lost Games 2 and 4 to the White Sox. Lidge did go on to have a stellar bounceback season with the Phillies in 2008, but will always be remembered in Houston for squatting down on the mound and pulling his hat over his eyes. Apparently, nobody remembers how dominant he was in 2004 and 2005.

The Astros have been a bookend team, having strung together seven consecutive losing seasons in the beginning and are in the midst of a five year losing streak (2014 will make it six). A switch to the American League West certainly hasn’t helped matters, as this is one of the most competitive divisions in baseball.

You know what else hasn’t helped? Switching uniforms and managers.

And after trying to pull the baseball world into a era of avant garde livery, the current team reverted back to being as plain as plain can be -- you can also see their entire 2014 assortment by clicking on the original Astros logo at the top of this page -- which sorta fits who they are right now. Their fans can only hope GM Jeff Luhnow can pull off the same sort of performance that he did as the St Louis Cardinals' scouting director.

But until then, this is a franchise designed for snarkability. 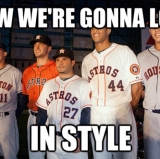