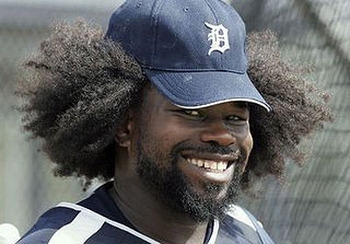 The Detroit Tigers suffered through a miserable stretch from 1994-2005 with unparalleled incompetence and rosters full of misfits, castoffs, and AAAA players. Their AL record of 119 losses in 2003 will be difficult to 'beat,' but the 2014 Houston Astros have yet to take the field!

Since the miracle season of 2006 -- where they lost the World Series in five games to the mighty Cardinals -- the Tigers have played well above .500 every season except 2008 and have made the post-season for three consecutive years. They were also swept by the San Francisco Giants in 2012, which was about as shocking as the Broncos getting waxed in the Super Bowl. The Giants came out swinging that series, as Kung-Fu Panda hit three home runs in Game 1 at AT&T Park. Justin Verlander just couldn’t carry over his regular season success.

Since the Tigers last World Series victory in 1984, they've moved into a new stadium, nearly set the record for most losses in a season, signed Prince Fielder to a ridiculous contract, and promptly dumped that financial disaster upon the Texas Rangers, much in the same way the government dumps financial burden onto middle-class taxpayers, and had twelve straight losing seasons.

It would be easy to just take every player from the 2003 team that lost 119 games, but luckily for you avid readers, you’ll get a more in-depth analysis and diverse selection across all genres.

I feel like we’ve been picking on the Dead Ball era a little too much in this series, but numbers don’t lie. Catcher has always been a position of strength for Detroit over the years, with such greats as Rudy York, Mickey Cochrane, Bill Freehan, Lance Parrish, and Mickey Tettleton behind the dish. New manager Brad Ausmus knows a thing or two about handling a pitching staff. Anybody would be better than Stanage.

Even Sam Crawford had trouble hitting in 1904, which was one season before Ty Cobb entered the league. You’re not going to find either of these players on this team, so don’t get your hopes up. So far, our All-Time Snark Detroit Tigers has yet to go deep. Let’s hope that changes soon.

Still haven’t left the yard. Zero home runs amng three full-time players is impressive. Young pulled off an even more impressive feat by slugging nearly 100 points less than his on-base percentage. Clearly those 54 walks had something to do with it.

Hey, hey! Look at that! Rodriguez blasted nine home runs. Finally, some pop at the hot corner. Rodriguez was a decent fielder as long as the ball was hit right at him. He also has the distinction of having the highest batting average on the All-Time Snark team. So he has that going for him, which is nice.

Well, would you look at that; Webb hit exactly no home runs as World War II was winding down. You’d think he’d be able to take advantage of some of the 4-F's that were playing at this time. Bob Feller was fighting with the Unites States Navy, and not having to face him 6-8 times per season should’ve given ol' Skeeter a boost to his numbers. But the Mendoza Line was just out of reach. All he needed was a seeing-eye single, or a bunt single with the infield playing deep. Having a number just a notch below .200 is great if you’re selling real estate. However, it looks terrible on the back of a baseball card.

Here we turn to more modern players, and although there were some Dead Ball veterans I considered for the All-Time Snark team, I just couldn’t possibly leave Rob Deer off the roster. When your batting average and strikeouts are nearly equal, you’ve had a tremendous season. Gary Pettis actually improved his batting average by two points from his previous year with the Angels. Pettis was a great base runner and outfielder, so he wasn’t completely useless. Morales had a little bit of pop, but nothing else. If you think 14 home runs was good production from a power position, then perhaps you should look at Don Baylor and Fred Lynn’s 1979 season and then get back to me.

This whole time, I'll bet you were wondering when the awful 2003 team would be represented, so look no further than this rotation. Maroth became the first 20-game loser in the majors since 1980 Brian Kingman of the Oakland Athletics, a team that went 83-79, meaning Kingman lost over a quarter of their games. Awesome! Bonderman, Cornejo, and Maroth accounted for nearly half of the Tigers losses that season. Talk about teamwork. But wait! there’s more …

Don’t forget about that 1996 Detroit Tigers team, either. They only won 53 games that season and lost 109 (if you weren’t good at match in school). Walker and Christopher didn’t throw that many innings -- 27 and 30, respectively -- but those numbers are just too good to ignore. They were both consistent; batters hit .351 off of them, and both were good at allowing the ball to leave the park. Bochtler threw over 60 innings that season, so as a full-time reliever, it’s unclear if Detroit didn’t have better options or if it just plain didn’t matter. Colyer would’ve fit in better with the 2003 team, methinks.

Because the 2003 team was so bad, we’re going to use a closer by committee, since it's essentially what the Tigers did that season, much like the starting pitcher roles. Eight different relievers recorded a save, with German and Mears tying for the lead with five each. This pair represents the infamous 2003 team, mainly because Detroit tried out so many starting pitchers that season and the losers became closers, which was the staff's purgatory; closers weren't needed very often. So it appears Spring Training didn’t end in March with the 2003 Tigers. It’s debatable if it even ended in September.

What makes the 2003 season even worse is that they hired a Tiger legend, SS Alan Trammell, to manage this goon squad, and they came within one loss of the 1962 New York Mets for the ultimate achievement of sucktitude. So, you subject your manager and fans to a disastrous season and then fire Trammell after three losing seasons, only to hire Jim Leyland, who instantly takes the Tigers back to the World Series?