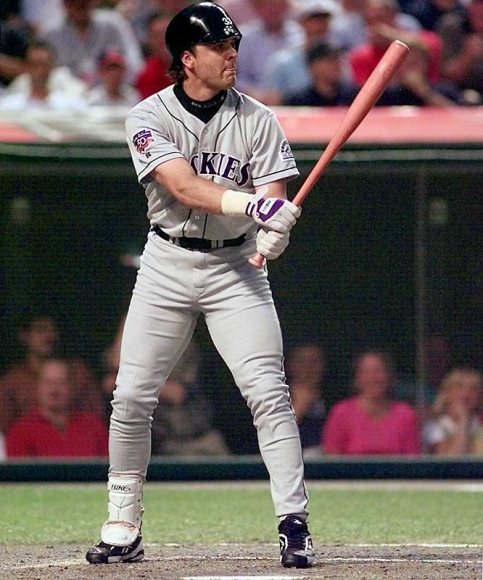 Hard to believe 2014 will mark the Colorado Rockies' 22nd year in major league baseball since entering the National League, along with the Florida Marlins, in 1993.

Most expansion teams in professional sports are dreadful for the first several seasons -- or 15 of them if you’re the Seattle Mariners -- but the Rockies made the post -season as the first ever Wild Card team in 1995, in just their third year of existence. In fact, the four most recent MLB expansion teams have had tremendous success in a relatively short amount of time.

Rockies players get a bad rap, as they get to play 81 home games in the thin mile-high air and perceivably have inflated numbers. They actually took the drastic step of placing all game balls in a humidor to make them less lively. But CarGo & Tulo don’t care about no stinking humidor!

As we move along the All-Time Snark teams for each franchise, some hitters are going to look worse than those on other teams because of how long some teams have been around. And keep in mind, the Rockies began playing right when offense exploded, so if you see a couple of hitters with stats that aren’t completely horrendous, that's why.

Just wait until we get to the pitching staff.

OK, forget what I said about over-inflated stats. One measly home run is all Kirt could manage playing with the great Blake Street Bombers. How Jeff Reed wasn’t the full-time catcher that season is beyond me, as he had much better numbers. Maybe Manwaring worked better with the pitchers. I sure hope so.

This selection is more indicative of the terrific career Helton had as the Rockies mainstay at 1B since 1998. Helton gave it one last go 'round in 2013 and retired as the face of the franchise. You didn’t think it was going to be Dinger, did you? One thing is certain, Helton will be rooting for the hometown Denver Broncos and ex-Tennessee Volunteers teammate, Peyton Manning in the Super Bowl this Sunday. It'll be very interesting to see what kind of support Helton receives for the HOF when he’s eligible for election in five years.

Ellis was a tremendous defensive second baseman, so let’s not discredit his work with the leather. The Rockies kept him around as a solid veteran presence in what was, and still is, a fairly young team. Ellis has never really hit for much power, but the .248 BA was well below his career norm. Welcome to the All-Snark team, Mark!

Stewart was one of the top prospects in the Rockies system and was part of the playoff team that ran into the Phillies juggernaut in the post-season. He spent just four seasons in Mile High and was traded to the Cubs before the 2012 campaign, where he struggled even further. Incidentally, Colorado now has one of the top 3B prospects in Nolan Arenado, who won a Gold Glove in 2013 and should help to erase the bad memories Rox Nation may have of past 3B. Stewart did not play in the league last year and may have flamed out already.

Barmes is most famous for injuring himself carrying deer meat up the stairs to his apartment and going on the DL because of the freak accident. Yeah, right. Was that deer on the TV with him? Shades of Bobby Petrino, and that's as far as we'll take that analogy! Wade Boggs threw out his back putting on cowboy boots, Rickey Henderson went on the DL for getting frostbite in August, and Vince Coleman got rolled up in the tarp machine and missed the 1985 World Series. What is your vote for strangest baseball injury?

Taveras was a leadoff hitter, so we shouldn’t expect too much pop from him. He did steal 68 bases that year but was finished in 2009, his last season with the Reds. McRae is the son of former Royals great Hal McRae, but the talent and heritage must’ve skipped a generation. Byrnes is a colorful character and is now an announcer for ESPN's Baseball Tonight. He spent one month with the Mariners in 2010 and then promptly left the team on his beach cruiser bicycle. Ken Griffey Jr pulled a similar stunt that same year, but drove away in his luxury SUV and at least called ownership while filling up with gas in Montana. Thanks for the courtesy call, Ken.

We’ll take a five-minute intermission if you need to go to the bathroom and fetch a Tums after taking in those gaudy numbers. There is not an ERA under six in this bunch; 6.16 to be specific, and that comes from Mike Hampton, one of the worst free agent signings in organized sports history. To be fair, Hampton was an All-Star in 2001, and he broke Don Drysdale’s single season record for home runs hit by a pitcher. Hampton probably wasn’t too far behind the record for home runs allowed in a season. Kile was also a disastrous free agent signing, as he left the cavernous power alleys of Houston's Astrodome and came to Denver, where the saying: “The gra$$ ain’t always greener” couldn’t be more true. The fact that Bohanon put together a .500 record can be attributed to the lineup that the Rockies had that season, as Larry Walker won the second of his three batting titles. Does the thin air cause pitchers to lose sight of the strike zone and walk a ton of batters? Is this like vertigo but on land?

Veres and Jimenez were actually the closers in those respective seasons. However, we’re saving the Rockies closer position for a special player. Jimenez set a franchise record for saves (41) in 2002, and his HR/9 and BB/9 were actually pretty good, which is why they aren’t listed. Blair was basically still pitching for an expansion team, so we’ll let him slide. The relievers come in just a notch below the starting pitchers with ERA’s in the fives. They're consistent, I’ll give them that.

Lastly, here we have the reliever that stood out amongst all the contenders. Chacon’s 35 saves are second only to Jimenez in franchise history, which is why it's such an overrated statistic. Chacon was an All-Star the year before while he was still a starting pitcher. Guess they thought he could find magic in the bullpen, too. Why Brian Fuentes wasn’t inserted as the closer at some point of that season is anybody’s guess. Denver area 7-11 franchises should’ve given out free Slurpees every time he earned a save. Now that is a promotion we’ll drink to!

This is probably the most unique and diverse team as you’ll find for an All-Snark squad. I mean, we have a 3B that hit 25 home runs but is still Snark worthy, and the most popular player in franchise history made this team. As for the pitching staff, an entire starting rotation with ERA’s over 6 is awesome.

Rockies fans are enduring another rebuilding phase, but as long as they can keep Troy Tulowitzki and Carlos Gonzalez around to teach the kids how to hit a humidor ball, they should be contending again soon in a fairly weak NL West.