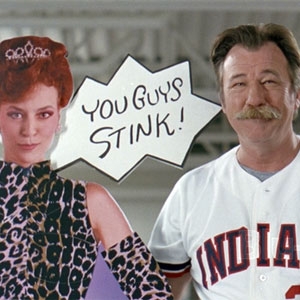 Cleveland has been rated one of the most miserable sports cities in America for good reason.

First off, they're home to the NFL’s Cleveland Browns, at least the second version of that team. Then LeBron James spurned the hometown Cavaliers for a fat deal with the Miami Heat. And the Indians have been so bad over the years that a popular movie, Major League, truly captured the dysfunctional nature of this franchise.

The Tribe has the second-longest drought for a World Series title, other than -- who else? -- the Cubs. It’s astonishing to think the great teams they had during the 1990’s couldn’t win the big one. Cleveland was probably licking its chops when it got to face the Florida Marlins in the 1997 series, but the Indians ran into the big Cuban, Livan Hernandez, and shut them down. They went toe-to-toe with the Braves in the 1995 World Series, and were turned away by Tom Glavine. Proof positive that pitching wins championships!

In recent years, even the Chief Wahoo mascot has come under attack by the ACLU, various Native American tribes, and politicians. I guess they weren’t proud of the representation for Native Americans in the 1995 World Series?

1948 was a long time ago, and Terry Francona may be the man to lead them back to the promised land. Of course, it may be under a different moniker.

These stats prove why it’s so difficult to compare eras, as the Dead Ball era lasted until 1919. Chances are he faced Walter Johnson, Ed Walsh, and Ed Cicotte quite often. At least he didn’t have to face Stan Coveleski, as they were battery mates that season. There was stiff competition at the Tribe's backstop position, as 1974 Dave Duncan, and 2002 Einar Diaz both had horrible seasons at the plate, but any player who doesn’t reach the Mendoza Line in a full season gets the nod.

Kotchman was pretty much just a glove man his entire career, which also ended after the 2012 season. As Kenny Rogers said: “You gotta know when to fold ‘em.” 2002 Lee Stevens received strong consideration here also, but Jim Thome played the majority of the games at 1B that season, his best in the Show.

Players during WWII must’ve felt like scabs, as most of the big stars were serving their country over in the Pacific. As you can see by the 28 errors Mack made, he wasn’t particularly adept with the glove. They were actually made with webbing at this time. Mack was out of the league by 1947 and wasn’t part of Cleveland’s last World Series team, possibly part of the reason they won that year. Well, that and Lou Boudreau.

Hmmm, we’re starting to see a pattern here from the 1917 team; even though they went 88-66, it was largely due to an excellent pitching staff, and having Tris Speaker in the OF couldn’t hurt. Whatever the case, Evans was a weak link on this team. Goodbye!

Quite a stellar line for one of the more offensive seasons during the pitching-dominated 1970’s. Veryzer was a good fielder, as long as the ball was hit right at him. He was just a notch above the league Range Factor. What’s more astounding is while Cleveland Stadium rated fairly high in the American League for home runs, he just couldn’t muster up enough energy to get one over the fence. Ah, the days of the traditional SS.

Cory Snyder was one of the top prospects to come through Cleveland in the 1980’s and showed promise his first three years in the league, but he was largely overshadowed by José Canseco, the other hot prospect to hit the American League in 1986. Snyder had a tremendous throwing arm, recording 18 OF assists in 1989, and had some pop in the bat -- he hit 33 HR’s in 1987, but come on, Larry Sheets hit 31 -- and was a member of the 1984 Olympic baseball team that finished second to Japan at the summer games in Los Angeles. Snyder also led the NL in strikeouts in 1993.

Unser found himself playing in the Year of the Pitcher - Part Deux as 1972 was dominated by the likes of Catfish Hunter, Wilbur Wood, Mickey Lolich, Gaylord Perry, and Nolan Ryan. It took Unser 439 PA’s to accumulate all those RBI’s. All 17 of them.

Case found himself suddenly playing against better competition, as players began returning from WWII in 1946. He could run and catch, though. So he has that going for him, which is nice.

This group wasn’t nearly as bad as I imagined. What’s more astonishing is that Luis Tiant made this list, just a year after posting one of the most dominant pitching seasons the entire decade of the 1960’s. He probably would’ve won the Cy Young had it not been for Denny McLain and his 31 wins. Tiant has the dubious distinction as being the only 20-game loser in Cleveland history. Well, Cleveland Indians history, that is. Waits only lost 10 games, partly due to the strike-caused split-season of 1981. What's not clear is whether the extra games would’ve helped improve his stats or made them look even uglier. Nagy won 15 games, thanks to the likes of Jim Thome, Manny Ramirez, Kenny Lofton, and Dave Justice. Chances are good that closer Mike Jackson bailed him out more than once. There's probably a reason that Ubaldo Jimenez is still a free agent, even if Cleveland did get into the post-season last year.

Here’s where things get dicey. Two relievers from the 1971 team explains that 60-102 record. Carmona ... errrr…Roberto Hernandez started three games in April in 2006 and was quickly moved to the bullpen where he didn’t fare much better. Hernandez did finish fourth in Cy Young voting in 2007 and was selected to the All-Star team in 2010, so he wasn’t a complete waste of space. Let’s not even talk about the closer on that 2007 playoff team!

Don’t be fooled by the 45 saves Borowski accumulated, as Cleveland won 96 games that year and nearly beat Boston in the ALCS. In fact, he was rarely used in that series. The Indians turned to Rafael Betancourt for late inning duty, which didn’t really turn out well, either. Borowski earned a save in Game 3 and got bombed in Game 6 when it was already out of hand. This was his final year in the league, and there is no doubt as to why.

The race is on for the first team to end its World Series drought. Will it be the Cubs erasing the curse of the billy goat, or the Indians erasing the ghost of Lou Boudreau?