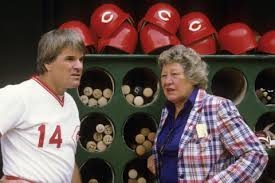 Known as the Red Legs, or Red Stockings, Cincinnati settled on just the Reds in 1890 when they joined the American Association. They were a successful franchise through the turn of the century and have been for most of their existence, primarily in the 1970’s when they won back-to-back World Series in 1975 and 1976. The Big Red Machine is one of the best team nicknames ever.

The Reds were also beneficiaries of the 1919 Chicago 'Black' Sox throwing the World Series. The Reds actually made more errors than the White Sox, but if it weren’t for Eddie Cicotte pitching like a maniac, the Reds may have actually lost the series.

An even more astonishing World Series victory came in 1990 over the mighty Oakland A’s, a four-game sweep where the Nasty Boys established themselves as the second-best nickname in Reds history.

Diaz died in 1990 in a freak accident in his hometown of Caracas, Venezuela. He was a pretty decent defensive catcher. Diaz only managed to get on base at a .236 clip. Flat out terrible. Diaz was an All-Star the season before, but did not get to play in the mid-summer classic hosted by the hometown Reds at Riverfront Stadium. Now you see why.

Quite an ironic selection, since it was Comiskey’s stingy ways as owner of the White Sox that caused the players to throw the World Series in 1919. Comiskey hit .227 that year, extremely low even for the era. He did somehow manage to hit three home runs though, which was extremely high for the era. Even so, that .274 OBP and .290 OBP were just dreadful. Congrats on having a stadium named after you.

Shean was caught up at the tail end of the Dead Ball era, so we can cut him some slack. Still, teammates Edd Roush and Sherry Magee didn’t seem to have trouble hitting the ball. Luckily, Joe Morgan makes Reds fans forget about every other player who ever manned 2B in Cincinnati.

There is just no excuse in the world why a player would suffer through a miserable season during the Golden Era of baseball when players started putting up meaningful statistics like Hack Wilson’s 190 RBI’s in 1930 and Joe Medwick winning the Triple Crown in 1937. Crosley Field was quite hitter friendly. Again, there are just no excuses that I know.

What a double play combination the Reds had in the early 1930’s! Perhaps the Great Depression was affecting more than their bank accounts. At least Durocher went on to have a successful career as manager of the Brooklyn Dodgers and New York Giants. He would’ve been Jackie Robinson’s first manager but was suspended for associating with gamblers, mobsters, and married Hollywood movie stars before the 1947 season. Durocher was elected to the Baseball Hall of Fame in 1994 as a manager, and ranks fourth all-time in ejections. Now those are some serious skills.

Quick, what do these men have in common? Give up? They all hit .213 during their respective, atrocious seasons. Corkhill should’ve corked his bat. Kane gets a bit of a hall pass for playing in the Dead Ball era, and he was only 22 points behind the entire team batting average. Drew Stubbs also gets credit for cutting his K’s down from 205 the previous season. What is it with the rapidly rising strikeout rates among current players? Pundits blame it on PED testing. Stubbs could orgininally blame it on watching Jay Bruce swing away and now can blame it on watching Jason Kipnis, Nick Swisher, Carlos Santana, and Michael Bourn swing away.

Outside of Tom Seaver, and a few select seasons from Mario Soto, and Jose Rijo, the Reds haven’t had too many great starting pitchers over the years. Even the domination by the Big Red Machine was all about getting a big enough lead for Rawley Eastwick to close the door. It’s always a good idea to try and outscore your opponent if you want to win the game. It’s safe to assume that Dwyer allowed a pretty high OAV because he was facing the great 1894 Phillies team quite a bit. Derringer didn’t have terrible numbers, especially for an offensive era, so he, too, can be classified as a hard-luck loser; 27 times. Clearly Sammy Ellis missed having Frank Robinson as he was traded to the Orioles for Milt Pappas in the offseason. Imagine if he was on those Big Red Machine teams!

If you haven’t developed high blood pressure or post traumatic stress syndrome after perusing these stats, then you either have ice water running in your veins or you admit ER patients, or perhaps you’re the guy who makes corpses look presentable at funeral services. Gabe White actually pitched better at Coors Field. It defies logic, so why elaborate?

1993 spelled the beginning of the end for Dibble, but that might have been punctuated a season earlier when he fought with manager Lou Piniella in the Reds clubhouse. Dibble was still hard to hit and could strike out the side in order with the best of ‘em, but he could also walk the bases loaded, hit a batter, and then give up a grand salami with the best of ‘em, too. Dibble missed the entire 1994 season and then attempted a comeback with the White Sox in 1995, where he was released shortly after the All-Star break. At least, he carved out a successful career in radio. There were some other top contenders; 2005 Danny Graves and 2003 Scott Williamson were not what you would refer to as shutdown closers.

Aside from bringing another World Series title to southern Ohio and northern Kentucky, Reds fans will never be satisfied until Pete Rose gets his due recognition and is elected into the Hall of Fame. The first step could be about a year away when Bud Selig retires.