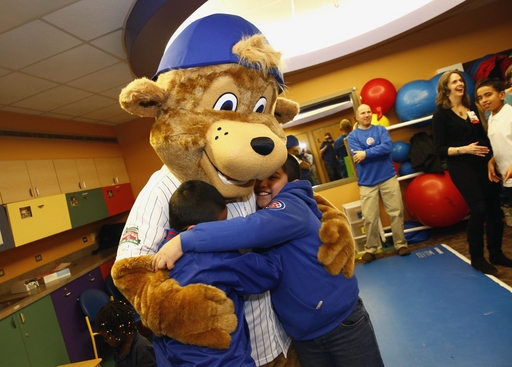 Finally, we’ve arrived at the north side of Chicago, at the friendly confines of Wrigley Field, which might be getting a huge makeover.

But nothing -- absolutely nothing -- can make over the stumbling and bumbling that is Cubness.

The Loveable Losers also got heat for another makeover by introducing their first-ever mascot, Clark, which is basically a giant sized Build-A-Bear. He’ll surely be a big hit with the kids, but he hasn't been well received in the blogs, forums, bleachers, etc.  It’s not even spring training, Cubs fans. Give Clark a chance!

As we move along all 30 major league clubs for the All-Time Snark teams, it’s becoming painfully obvious that there were players who somehow held down a job longer than the awkward uncle that you only see at Thanksgiving. With unemployment rates stubbornly high as we dig out of the Great Recession, this really says something about the ingenuity and resilience of the American people.

For Cubs fans, it’s 1908 and counting. Now, that is either true resilience or the dictionary definition of insanity.

At least Kling had the privilege of catching one of the greatest rotations ever, consisting of Mordecai 'Three Finger' Brown, Ed Reulbach, Orval Overall, Carl Lundgren, and Jack Pfiester. Not sure what kind of catcher’s mitt he used, but his bat was probably carved out of an oak tree and caked with some sort of concoction of pine tar, dirt, and whiskey. The deadball era wasn’t conducive to offense, so the catcher basically just had to roll the ball back to the mound after another 1-2-3 inning.  1993 Rick Wilkins he was not.

Somehow the Cubs let him get 606 PA’s and -- let’s cut him some slack -- he hit 28 bombs, only 18 less than he hit with Tampa Bay in 2007. He did walk 101 times to go with 161 K’s. Peña was far from his Gold Glove from of 2008. What’s more disturbing is a full season in Wrigley Field should’ve provided ample opportunity to accumulate big numbers. A return trip to Tampa Bay in 2012 actually made it worse, and then he was banished to Houston. 1963 Ernie Banks was the other option at this position and there is no way on God’s green earth that was going to happen.

A slugging percentage of .299 is awful enough, but a .207 BA to go along with it is even worse. Don’t even get me started on the .294 OBP. Clearly, Morgan was not the table-setter in front of Ernie Banks. It’s players like this who have kept the Cubs from winning a World Series title over the past 106 years.

Outside of Hall of Famer Ron Santo, this has been a black hole of a position, with a few other decent seasons scattered about like 2006 Aramis Ramirez, post-WWII Stan Hack, and an at-the-end-of-his-career Ron Cey in 1984. What’s more astounding about Hoak’s miserable season is that it came in 1956, one of the most prolific seasons of that decade where players like Mickey, Willie, and the Duke routinely hit 40-plus homerun’s with ease. Wait a minute. Did I really just compare Don Hoak to Mickey Mantle? I need my morning coffee.

This is the man who the Phillies had to have in the Ryne Sandberg-and-Larry Bowa trade. Over 724 PA’s, de Jesús failed to break the Mendoza Line and finished the strike-shortened season with a .191 BA, 0 HR’s, and a .233 SLG%. At least the Phillies brought Sandberg back to be their manager this year. It’s great to see when people atone for their mistakes.

Two players from the Cubs' last World Series championship team go to show how much they relied on the starting pitching that season, or the Tinker-to-Evers-to-Chance trio. Corey Patterson probably was a victim of MLB’s new drug testing policy that was implemented the season before. Patterson was a high draft pick who never fulfilled his promise, much like Cubs teams over the past 50-some-odd years.

This has actually been an area of success for the Cubs in recent history, as the likes of Greg Maddux, Kerry Wood, Fergie Jenkins, Rick Sutcliffe, and Mark Prior (for one season anyway) have had success pitching at Wrigley. Then there is the other end of the spectrum, where Ellsworth and Bonham each lost 22 games, and Larry Jackson wasn’t far behind, losing 21 games. Ironically, none of these men posted an ERA above 3.98, which goes to show that perhaps they were hard luck losers. Loveable losers has a much better ring to it, don’t you think?

OK, we’re starting to get to the bottom of the Cubs woes. There were 'way too many good choices to stack in the bullpen! In 1986, the Cubs were two years removed from a heartbreaking playoff loss to the Padres, so it’s safe to assume they should’ve still been competitive. Instead, they lost 90 games that season, and the fact they let Ron Davis pitch 59 innings is a big reason why. Buck Freeman may have been the reason teams started using a bullpen coach, as that 8.77 ERA, 2.22 WHIP, and .412 OAV would cause any manager heartburn or possibly an aneurism. How Bryan Hickerson won three games and recorded one save during the 1995 season is beyond me. It surely didn’t have anything to do with that 8.57 ERA. The Cubs' pitching must’ve wanted to see if he could work out of the jam he put himself into. Get on the phone to the pen!

The late Dave Smith pitched his last full season with the Cubs in 1991 after a very successful career as the Houston Astros closer during the 1980’s. He came out of spring training as the man to shut the door in the ninth inning, a situation that lasted until about June, after which time the Cubs turned to Paul Assenmacher as Smith struggled badly, going 0-6 with a 6.00 ERA and allowing six home runs. Must have been the devil’s work. Apparently, the Cubs weren’t quite ready to turn over closer duties to a young Heathcliff Slocumb. I don’t blame them one bit!

It's now up to Theo Epstein and Rick Renteria to turn this franchise around. At least, they’ll have a newly renovated ballpark, but please don’t irk those rooftop fans by blocking their view of the terrible baseball they’ve come to enjoy over the years.

The curse of the billygoat lives!