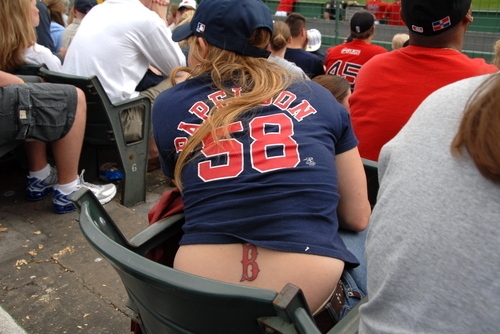 Since the “Curse of the Bambino” was lifted in 2004, the Red Sox have won two more World Series titles, including last season over the St Louis Cardinals.

As Boston enters the 2014 campaign as defending champs, it’s easy to look at their talent-laden roster -- with more riches than the vault of Erebor -- and conclude that this team is again the favorite.

Baseball seems to produce long, extended periods of championship droughts like no other sport, and there were times when Chowder Heads probably wondered if they would ever hang another pennant from the black mold-infested rafters of Fenway Park.

Sorry to bring up old wounds and suppressed memories, but nobody feels sorry for you Fever Pitch fans after threetitles in less than 10 years, okay?

Catcher has always been a position of strength in Beantown, but not this season. Peña finished 19 points under the Mendoza Line in 1993, and both his SLG% (.257) and his OBP (.246) were under .300; just abysmal. He was still a pretty darn good defensive catcher though, which apparently is all he ever was.

In the year that balls finally started to leave the yard on a consistent basis, Todt just couldn’t quite reach that 302-foot Pesky pole more than six times. First base has also been a position of strength over the years for the Red Sox, so it’s not like there were a lot of other candidates here. 1968 George Scott wasn’t quite a full-time player, but he only hit .171 that year. I think we covered that 1968 was dominated by pitching, which makes Carl Yastrzemski’s season even more remarkable.

Very obscure player who only lasted three seasons in the Show and for good reason. Smith didn’t hit for average or power, didn’t get on base much, nor was he a very good baserunner. He played shoddy D up the middle and struck out a ton. Moving right along ...

As you can see by the year, the Red Sox have been around since the Teddy Roosevelt administration. Vitt was teammates with Babe Ruth, Harry Hooper, Waite Hoyt, and Herb Pennock. That’s about as cool as his name  My favorite stat is Vitt struck out 11 times in 664 plate appearances but hit no home runs. Of course, the baseball back then was a tangled mess of twine and tobacco spit.

Hoffman is most notably the older brother of former Padres closer and future HOFer, Trevor Hoffman. This season is typical of what SS’s used to be before the likes of Jeter, A-Rod, and Nomar burst on the scene and revolutionized the position. A-Rod revolutionized how baseball players “worked out.” Hoffman hit a career-high seven home runs that season but managed just a .209 batting average. You’re a right-handed batter at Fenway Park! Aim for the Green Monster ,and you’ll be standing on second base like clockwork.

“For its one, two, three strikes, you’re out at the old ball game!”

As you can see, most of the pitchers were victims of the first true offensive era of major league baseball. Once Babe Ruth hit 60 HR’s in 1927, it was on. These pitchers had to deal with Murderer’s Row, Al 'Bucketfoot' Simmons, Hank 'The Hebrew Hammer' Greenberg, Earl Averill, and Jimmy 'The Beast' Foxx. Nobody could survive that group. Ruffing lost 25 games, Harriss lost 21 games, and Russell lost 20. That’s what the bookies call a trifecta. Moorehead walked almost as many batters as he struck out. Luckily, the Red Sox have had much better starting pitching during their recent dynasty.

Here we have more pitchers victimized by the immense output of major league hitters. Not even the strike in 1994 could save Greg Harris's stats from being inflated like the Goodyear blimp. There’s not an ERA under 7.45 amongst these relievers. The OAV’s are all over .300, which doesn’t lead to success, nor does the 8.19 BB/9 IP posted by Lundgren. You see, the goal here is to keep runners off base.

That 0-5 record, 5.79 ERA, and 6.6 BB/9 IP were tempting enough for the Seattle Mariners to trade Jason Varitek and Derek Lowe to acquire Slocumb at the trade deadline to bloster their bullpen. It went down as one of the worst trades in baseball history. He improved slightly for Seattle by only going 0-4 with a 4.13 ERA and earned the scorn of baseball fans in the Pacific Northwest forever!

It’s easy to make fun of Boston’s long World Series drought, but they have exorcised those demons without the assistance of an old priest and a young priest.

Perhaps their fortunes would’ve turned out differently had they never sold Babe Ruth to the Yankees, but hindsight is 20/20.