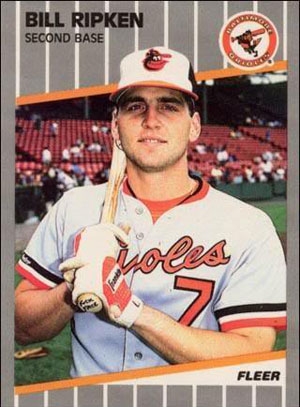 Then there's his little brother posing for his baseball card picture in 1988 and the ensuing cover up.

Pretty much from here on out, the Baltimore Orioles and the Ripken family will be forever engraved in the psyche of baseball fans, not just on Chesapeake Bay, but across the Heartland.

Cal Sr got a bad rap by guiding the 1988 Orioles to 21 consecutive losses. Yeah right, like the manager picks out your batting gloves and jock strap. Just lace 'em up and play ball.

Baltimore has shown signs of life the past couple of seasons after losing 90+ games from 2006-2011. Think they struck pay dirt on that Chris Davis for Koji Uehera trade?

Remember, we’re analyzing each team in their current form, meaning we’re only considering players from 1954 to present.  You really expect me to scour through World War I era box scores of the St. Louis Browns? Do you really think I have no life? Please don’t answer that.

If 1968 is considered the year of the pitcher, than 1967 is Plan B. Unfortunately for Etchebarren, he had to face the likes of Jim Lonborg, Mel Stottlemyre Sr, Carl Yastrzemski, Cesar Tovar, Rod Carew, Harmon Killebrew, and Frank Howard. Okay, so a couple of those dudes aren’t pitchers, but they still played in the American League and it was Etchebarren’s job to help the pitchers get them out. Yaz didn’t make many outs and Killebrew led the league in walks, so the O’s were behind the 8-ball from the beginning. It was either Etchebarren or Human Rain Delay Rick Dempsey's 1986 season for consideration behind the dish. At least Dempsey was a former World Series MVP and goes by the nickname McDreamy.

Here we have the first player to be All-Snark for two different teams. Reynolds was four strikeouts away from reaching the 200 barrier in four consecutive seasons. That would truly be an impressive feat! Adam Dunn came one K short (2012) of breaking Reynolds' single season strikeout record (223 in 2009), which may stand forevr. The HOF has to recognize that achievement in some sordid, traveling circus freak show fashion. One thing that can be said about Reynolds' short time with the Orioles is consistency, as he hit .221 each of his two seasons at Camden Yards.

There's a reason that a teammate pulled a nasty prank on Cal’s younger brother and wrote an expletive on the knob of his bat when he posed for his baseball card photo. Clearly his last name benefited him in the same way that Paris Hilton, the Kardashian sisters, and Ashlee Simpson gained fame based upon their families' success. Ripkens line of .207/.260/.258 was compiled over 568 plate appearances, and he crushed two home runs to boot. Ripken didn’t inherit his older brother’s Gold Glove style, either. Somehow, he convinced the Orioles he was the man at the two-bag until 1992, during which time he improved enough to lead the AL in sacrifice hits in 1990. Having one of the most famous baseball cards ever is his legacy, not being Cal’s younger brother.

Brooksie was still his Human Vacuum Cleaner self at the hot corner, but his bat was left in a time warp in 1966. Brooks barely cracked the Mendoza line, hitting at a .201 clip, and his SLG% was only seven points more than his OBP. That's extremely rare and almost mathematically impossible. Brooks retired after the 1977 season and was elected into the HOF in 1983, deservedly so after appearing in 15 straight All-Star games, earning16 straight Gold Gloves, and taking home a 1964 AL MVP trophy.  We can’t talk bad about Brooks, except for '66. We're cruel but fair.

Teaming up with Brooks on the left side of the infield assured that nothing squeaks through, as Belanger was equal to Brooks Robinson with the glove. However, he was even worse with the bat. Let’s cut Mark some slack, thought. 1968 was the Year of the Pitcher, after all, and if you had to face Denny McLain and Luis Tiant, you’d be lucky to .208 with a .272 OBP and a .248 SLG%. How’s your short term memory? Belanger actually had a lower SLG% than OBP that season, which was stated as being almost mathematically impossible. Belanger inexplicably struck out 114 times that year, which is about double the normal output in his other full seasons. Blame it on that unfair, tall mound.

Now, let’s pay our respects to Paul Blair, who recently passed away on 26 Dec 2013, but clearly Baltimore was letting him roam the OF based upon his heroics during the 1969 World Series. It’s hard to believe the Orioles were a very successful team in the 1970’s, appearing in three World Series. Guess it has more to do with Jim Palmer than the sluggers on that team, although Buford had some speed. So Brady Anderson goes from 50 HR’s to just 8 five years later. After hitting 50 HR’s in 1996, it’s like he said to himself,  “Oh crap, I'd better ease off the dosage of rhinoceros testosterone.” It’s ironic that 2001 is pretty much the epicenter of PED’s, steroids, HGH, the cream, the clear, or whatever you want to call it. Not sure what Brady was using that year, but he should’ve gone back to his 1996 workout regimen.

From the How quickly fortunes can change file, Don Larsen went 3-21 for the ’54 Orioles and then promptly threw the first perfect game in World Series history for the 1956 Yankees. Barber was so bad in '67 that he became a member of the 1969 Seattle Pilots. Those are the kinds of players that expansion teams are forced to trot out to the mound. Lopez and Cabrera each went 9-18 in back-to-back seasons with remarkably similar SABR stats that will provide for interesting case studies at their upcoming conference. Cabrera had a consistent ERA in the 5’s his whole career and posted 5.55 in 2007. Baltimore thought they had something with Guthrie, but he followed in the footsteps of Cabrera by posting an ERA over 5 and wasn't good at keeping the ball in the ballpark, either.

There were so many candidates to fill out the bullpen that this is probably a case where you could justify a 15-man pitching staff. All you need to know about the O’s relievers is the lowest ERA was posted by Milchin at 7.44 (Shuey’s starts with a 9).  This group allowed hits, runs, walks, home runs, and mostly, disappointment on the face of the Camden faithful.

This was a difficult selection, as Jones was a terrific reliever for most of his career. I think he got caught up in the offensive explosion of the time and was facing some stout lineups in the AL East. The Orioles were a playoff team in 1996 and 1997, but 1995 was not a good year for them, as the Red Sox and Yankees started their reign of post-season dominance. Jones did wind up saving 22 games but posted a 5.02 ERA and a 1.52 WHIP. Those are not closer numbers. In fact, they're not really Appalachian League numbers, either.

The Orioles showed signs of life in 2012 by making the post-season and beating the Rangers in the first ever Wild Card showdown. If they were in the AL Central, I’d give them a shot at winning the division, but not in the East.

Baltimore will have to party like it’s 1983 until things change, like Tampa Bay falling into the Gulf of Mexico and Boston’s star players all getting old and washed up in the same season.