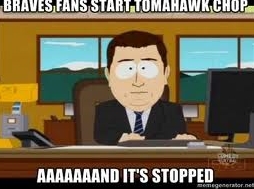 Hope you all enjoyed the first ever All-Time Snark Team for the Arizona Diamondbacks.

I really don’t take much joy in researching, critiquing, and dealing with utter incompetence, as I get plenty of that in the office during 9-5. But this type of incompetence is irresistable in the same way mosquitoes are drawn to ultraviolet light.

On to version 2.0, the Atlanta Braves.

Now, for the purposes of this segment, the All-Time Snark teams will be limited to the current iterations of each franchise, meaning you won’t see any Milwaukee Braves on this team. Nor will any players be featured from the Boston Beaneaters, Boston Bees, Boston Braves, Boston Doves, Boston Red Stockings, or Boston Rustlers, for that matter.

The Braves moved to Atlanta in 1966, so be prepared to see some names that you are familiar with, and maybe after the 2017 season, you’ll find players from the Cobb County Braves on this team.

Believe it or not, 2012 Brian McCann was strongly considered as a snark candidate for the premier position on the diamond.  It’s unfathomable to think one of the best catchers in franchise history -- and there have been plenty of great ones -- would be considered for the All-Time Snark team. Luckily for the newest member of the New York Yankees, Berryhill rescued him from certain humility. In a year that saw offense explode, and the Braves were in the third season of their remarkable playoff run, Berryhill managed to get on base at a .291 clip and slugged a whopping .382. If he'd hit .382, then he’d be in business and not on this list.

This is a painful selection, as Evans was a pretty good ballpayer and ranked the most underrated ballplayer in history by the great Bill James. In 1985, he became the first player to hit 40 HR’s in both leagues, and was the oldest HR champ in the AL ever. Of course in 1985, Steve Balboni hit 36 HR’s. What was going on that year, anyways? Things that make you go hmmmm. He'll forever be known as the first player to hit 400 career bombs and not make the Hall of Fame, which may have been the first sign he'd show up on a snark list. Evans is currently the commissioner of the California Winter League in Palm Springs, clearly enjoying his retirement.

OK, his last name translates to owl in Swedish, and it's legacy is as a name of royal nobility up there, but there are apparently no Swedish baseball fans in the Peach State. And owls being wise is a myth. As commissioner of a fantasy baseball league, it's my responsibility to make the league fun and enjoyable for all participants, and as none of us speaks Swedish, I exercised my less-than-noble perogative and allowed our organization to nickname Uggla: “FUGGLABAR” during our draft last year. In case you’re playing along at home, this is twist on the military term FUBAR.  If you need me to spell out this acronym, please Google it instead. Uggla hit an astonishing .179 and fanned 171 times. Maybe it’s not too late to trade back for Kelly Johnson.

Castilla came home to man the hot corner after brief stints in Houston and Tampa Bay. Atlanta must’ve felt like a glowing metropolis after those stops at that time. Well, that was a failed experiment, and they get an F in chemistry. Clearly a product of Coors Field, Vinny flourished in the thin air of Denver, crushing 40 bombs in each of three straight years. Turner Field wasn’t nearly as kind to Castilla, as he managed just 12 HR’s and a .268 OBP. He promptly returned to Colorado in 2004 and led the NL in RBI’s with 131. Yeah, stay at the Coors brewery, Vinny.

When you roll out a SS who produces an OBP barely above his batting average, it’s clear why the Braves were the first team on the precipice of going from last place one season to the World Series the next in 1991. Of course, it also helps when you have league MVP Terry Pendleton on your squad. A slugging percentage of .316 would be a decent BA, but that’s not how it works. Thomas had stiff competition from 1995 Jeff Blauser and 1999 Walt Weiss, but at least Weiss made an amazing series saving play in the 1999 NLCS against the Astros. Somehow, Atlanta thought Thomas was good enough to be the starting SS for five years.

You’re probably as shocked as I to find Andruw Jones on this team after all the Gold Gloves and strip club incidents, but a .222 average and .311 OBP really pads the résumé for the All-Time Snark team. BJ Upton had a truly forgettable season last year, as he was supposed to team with brother Justin and RF Jayson Heyward to make a triumvirate not seen since Ghidorah.  Instead, the older Upton produced a .184 BA and 9 HR’s. That’s what $13million gets these days. Jim Wynn -- the Toy Cannon -- probably wishes he could hop in that Hot Tub Time Machine and roll back the calendar to 1969 when he was an MVP candidate with the Houston Astros. Walking more than striking out is good. Collecting fewer hits than strikeouts is bad. So is hitting .207 over a full season. Apologies to 1988 Dale Murphy and 1972 Mike Lum. There’s only room for three, boys.

Two HOF’ers make the rotation for the Tomahawk Choppers. Amazing. Simply amazing! As much as Atlanta’s SP’s have been heralded over the years -- and for good reason -- there have also been some serious duds. Niekro lost 20 games in ’77 and then repeated the feat in ’79. Rick Mahler provided opposing batters with a .301 OAV and lost 18 games. Glavine lost 17 games in ’88 before finding his HOF form. Now, Kyle Davies only started 11 games for the Braves in 2007, and I’m not sure why they allowed him that many chances since his ERA begins with a 6. Derek Lowe has been a pretty effective starter and closer over the years, but not in 2011. A 5.05 ERA would be understandable if, perhaps, he got injured after just one rough outing, but there were 17 of them. It’s quite clear that the Braves' philosophy is 'take the good with the bad.' How else can you explain Niekro and Glavine making this team?

Carroll turned out to actually be a darned good reliever, but not until he arrived at Riverfront Stadium in the early 1970’s. Chances are good the Big Red Machine was responsible for the bulk of his success. Did the Braves not take the entire team from Milwaukee when they moved to Atlanta in time for league play in 1966? Fischer probably thought Joe Adcock was still stuck in 1961 and he'd save him with a three-run homer in the bottom of the ninth. Perhaps he didn’t realize Eddie Mathews was washed up by then. LaCorte produced inflated Nintendo game numbers in the summer of ’77, and by inflated, I mean an 11.68 ERA and .394 OAV. Acker was so awful in Atlanta, they sent him back over the border to Toronto for a light-hitting backup OF named Francisco Cabrera. Now there was a diamond in the rough!

Talk about stats that jump right off the page at you! A 6-16 record would be understandable for the fourth starter on a terrible team, but he was the full-time closer in 1979, long before setup men, LOOGY’s, and the one-inning closer. How he saved 25 games is anybody’s guess.

Let’s give credit to the Turner Broadcasting System for introducing America to the National League in the 1980’s. Otherwise, as a pimply-faced teenager growing up in the Pacific Northwest, I would have been relegated to terrible baseball in the American League West and then got to read about it in the newspaper the next morning.

Obviously, the Braves will have a big celebration in Cooperstown this summer, as three legends will be inducted and receive their plaques. Ted Turner is probably wondering when he’ll receive his.