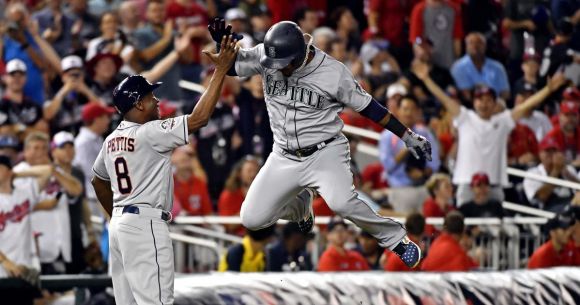 Hall of Fame manager Earl Weaver was pure and simply ahead of his time.

It's how he built his lineup every day. Whoever had the best possibility of bashing one against whomever the opponent would have on the mound at any given time was gonna get his cuts.

After the way this season's All-Star game went, maybe MLB should think about naming the Midsummer Classic in his honor.

A fastball's velocity didn't matter, and neither did the fact that baseball's best pitchers were serving them up.

Because all they were doing was serving them up as the American League prevailed in an 8-6, 10-inning encore to yesterday's Home Run Derby.

It was proof yet again that damn near anyone who pulled on a major-league jersey was well capable of going deep:

Amazing. 20 hits in an event normally dominated by slingers, and 10 of them left the yard. They accounted for 13 of the 14 runs scored.

One of them never shoulda been. Cincinnati's Joey Votto may have won a gold glove in 2011, but that apparently gets lost when dugout rails are in the picture.

It also underscored the influence of fans on the game. Jean Segura was only on the AL roster because he was their final-player selection.

In contrast, the game featured one of the other givens in MLB 2018: strikeouts. Of the 60 outs recorded, 25 of them were punchies.

The coda was even cooler for Alex Bregman, who was named the Ted Williams All-Star Game MVP.

That's because his granddad was general counsel for the Washington Senators 2.0 -- the franchise that's now the Texas Rangers -- and that's where Ted Williams made his one-&-only attempt at managing before, you know ...

Anyway, the award's got a special meaning to Bregman.

Dude's gotta be even more grateful the award isn't the Spendid Splinter's head.