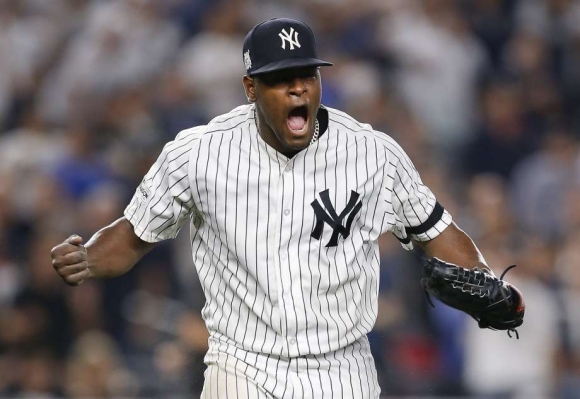 Luis Severino surely felt he owed his teammates one.

It was the wild card playoff, and dude got bombed.

Fortunately for Severino, his fellow Yanks picked him up and kept it going all the way to their third potential elimination game in these playoffs.

If nerves and trying to be too fine were an issue against the Twins, dude definitely got those outta his system this time around:

What Severino and Aaron Judge didn't do to aid the cause, Cleveland handed to the Yankees on a silver platter:

As well, check the Tribe's hit total. The best one can say about it is producing three runs from those and a walk is that the Indians are living and dying by the long ball or the absence thereof.

Terry Francona's bench isn't making up for the loss of Edwin Encarnación at all.

That's what can happen with too many eggs in one basket.

As well, with 14 of Cleveland's 27 outs coming from punchies, dudes gotta work at putting the ball in play. They could start by laying off those sliders that start at mid-thigh or lower and just sit on the heat.

New York moundsmen offer an abundance of heatseekers. Indians hitters may as well gear up for them early and tip their hats to any of the wrinkly stuff that wanders over the plate.

Meanwhile, the Yankees' proficiency for two-out hits -- four straight in the second inning alone -- allowed them to capitalize on Cleveland errors time and again.

True, their batters also struck out 11 times, but they made the most of the extra plate appearances they were gifted by the miscues.

For a team that looked dead and buried after two games -- due in part to a monumental mental error -- the Yankees now must prove they can wrap up a series in Cleveland.

Interestingly enough, given last year's World Series, so does the Tribe.