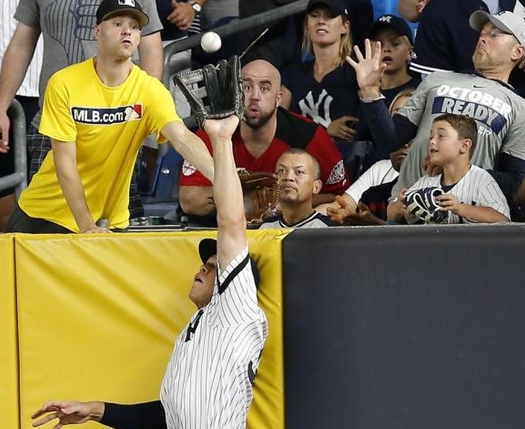 In most sports, the term sudden death denotes a finality that seeming comes out of nowhere to hand down hard fate.

Baseball's short version is the walkoff, of course.

This is especially the case in baseball, where a 162-game marathon morphs into a painfully brief best-of-five game show.

The division series can and often does put a team into survival mode from the first pitch of its first home game.

So from the first offering onward, the pressure's amplified.

It's a drama that should favor pitching, lengthy scouting reports and videos or not. However, that hasn't been the case in 2017. Baseballs have been flying everywhere and beyond, which has been happening at record levels all season long.

This is what set the stage for the irony that was Game 3 involving Cleveland and New York.

But the Yankee hurler was the one who couldn't make a mistake, and thank's to 6-7 Aaron Judge, the one he almost made was pulled back in.

Judge, who's hitless in the series with three punchies in Game 3, definitely made his mark in Game 3 with that catch, which seemed routine because of his height.

Greg Bird carried a .190/.288/.422 slash line into the playoffs, due to a large part by a bone bruise in his ankle that had sidelined him since May. However, returning from virtual obscurity in the playoffs, dude had one dinger in this series and was clearly primed for another:

And that was it.

A few triple-digit heaters later from Aroldis Chapman, and this series was headed to Game 4.

It'll no doubt be another night of excruciation, but for the Yankees, it beats the alternative.