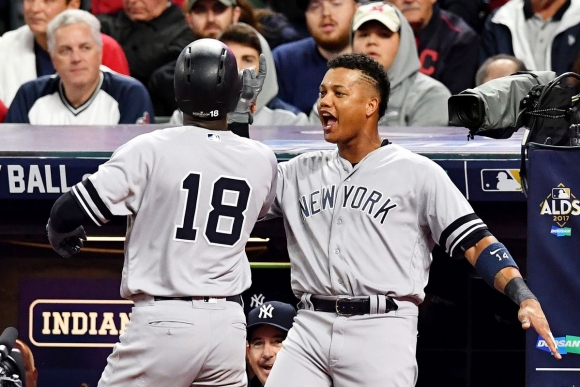 The playoff series that have gone the distance this post-season have put pitching squarely in the spotlight.

Not that it isn't a few steps from it at all times, but 2017 has a different feel.

MLB's batters set a record for home runs this year.

Coincidentally, MLB's pitchers set a record for punchies this year.

By any measure, Cleveland ace Cory Kluber had another boffo regular season in 2017.

When he was seemingly solved in last year's World Series Game 7 -- the Chicago Cubs were seeing him for the third time -- dude's been anything but money in the playoffs.

Kluber didn't get outta the third inning in Game 2 of this series, surrendering a pair of bombs to New York's Gary Sánchez and Aaron HIcks.

In this do-or-die affair, Kluber was chased in the fourth after Didi Gregorious took him deep for a second time.

Toss in the fact that crafty lefty CC Sabathia was mesmerizing Tribe bats and Brett Gardner sealed the deal with a 12-pitch, two-out, two-RBI single, and the Yankees competed their ultimate comeback from an 0-2 series deficit:

Cleveland put together a 102-win season that included an American League record 22-game winning streak. They wrapped up home-field advantage for the playoffs, and yet, they're packing their gear.

Home field probably means less in baseball than any other sport.

Putting a now-69-year World Series title drought means more. Much more. It's fighting the odds anymore to scale the playoffs three years in a row.

For the Indians, this one really hurt.