Published on 8-Oct-2018 by Alan Adamsson 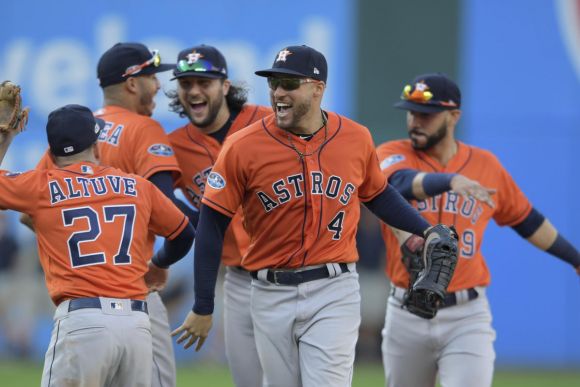 Intradivisional rivals like Boston and New York get up close and personal 19 times in the regular season, so the player could damn near be their own advance scouts.

No so for interdivisional matchups. Houston and Cleveland only met seven times.

And thanks to the wonderment of schedulecraft, they were done with each other by the end of May.

The 'Stros will definitely do so more fondly.

Cleveland hasn't worn a World Series since 1948. The closest they came was finishing second in the Sentimental Series of 2016.

Not much more than what's already been done, really.

By virtue of being in MLB's suckiest division, the Tribe got a virtual bye into the ALDS. They went 3-4 against Houston in those May home-&-home series, so they beefed up for the rematch by trading for Josh Donaldson.

Worse, in Game 3, Trevor Bauer forgot how to throw a ball to the bases.

With seemingly no alternative, then, Houston swept the series with an exclamation point after drilling Cleveland, 11-3:

The 'Stros go on. Again.

The Tribe goes back to the drawing board. Again.

In a stadium whose predecessors hosted a shipload of post-season dramatic moments, two more were added in Game 3:

It's a not-surprising-anymore sidebar that umpire Ángel Hernández outdid himself, going 1-4 head-to-head against instant replay review.

And to think dude's suing MLB about being passed over for playoff assignments.

If that case ever makes it to trial, he's gonna be MLB's star witness.