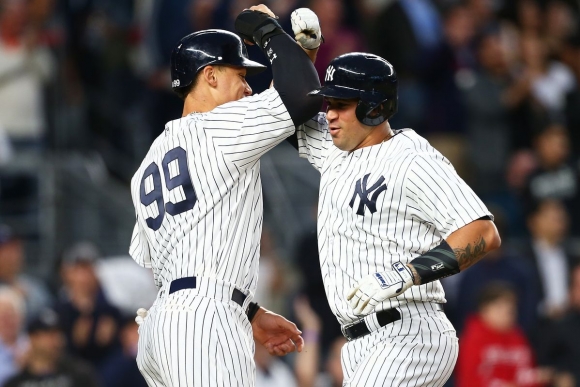 The Houston Astros' plan is to make baseball history this year.

No team has ever been to the World Series representing both the National and American Leagues.

The 'Stros were swept by the Chicago White Sox in 2005 before then-Commish Bud Selig brokered their sale by demanding they trade leagues with the Milwaukee Brewers.

Now, to keep that plan alive, Houston needs to achieve another historical first.

The American League Championsip Series has been played every year but one -- thanks, Bud -- since 1969.

In that time, none of them have featured the home team winning every game, and that's what Houston's gotta do if they expect to make history by just being in the World Series.

After winning the ALCS' first two games at home, the 'Stros have now been swept in New York to find themselves on the brink of elimination.

In a reprise of Game 1's pitching matchup, Masahiro Tanaka shackled the Astros on three hits, walking only one and fanning eight.

During the regular season, Houston's offense was turbocharged, averaging 5.5 runs per game. So far in the ALCS, Yankee pitching has held them to nine runs in five games. A .147 team average will do that.

Both teams have done well in their home yards:

The post-season offers small sample-sizes, though, but Houston fought all spring, summer, and fall to have the extra home game in playoff series.

They're about to discover how much of a factor it is.

Or, based on history, how much it isn't.