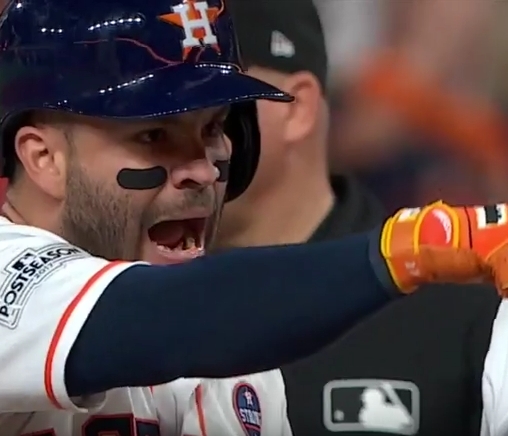 This was one of the most profound, logical in its own way observations ever uttered by the late, great Yogi Berra:

That reality -- sorta -- starts well before anyone needs to ratchet up the intensity required to avoid becoming the next man in a red shirt.

In this instance, it came in Yankee Stadium's visiting clubhouse moments after the Houston Astros had finished blowing a 2-0 American League Championship Series lead and found themselves one game from elimination.

Dude basically purged all the negative vibes from being swept at Yankee Stadium.

Of course, it helped knowing that Justin Verlander was gonna be starting Game 6 in a yard where he was 8-0 as a 'Stro.

Dude's been golden since his last-second trade from Detroit.

As if he had to secure his legacy any more, Verlander did it anyway.

He blistered the strike zone for seven shutout innings, allowing only five hits while walking one and fanning eight.

When help was needed, it came, starting with a gem of a twin-killing, compliments of Carlos Correa and José Altuve.

The Yankees' Luis Severino was in command, too, matching Verlander inning-for-inning until the fifth.

He'd not allowed a hit until the fourth before getting touched in the fifth.

Brian McCann's double was crucial for Houston, but Severino's undoing was that slider to Altuve that didn't.

Talk about a tomahawk!

Confidence is definitely not an issue for Houston anymore, with the possible exception of Josh Reddick.

Dude's 0-21 for the ALCS but is a defensive stalwart. He's still in the Game 7 lineup against the crafty CC Sabathina, albeit just barely:

Verlander's act will be hard to follow, but for Houston's sake, Morton may have no choice.