ALCS: The Play That Wasn't Highlights a Game 5 That Was 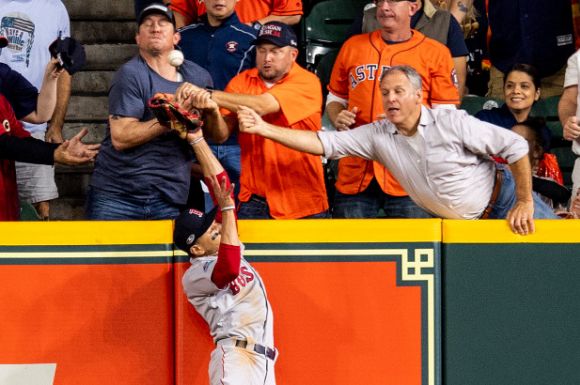 All the replay angles that weighed in, and still nobody knows what really happened.

RF umpire Joe West didn't hesitate, though. He called José Altuve out because he saw fans reaching over the wall, which interfered with Mookie Betts' opportunity to catch the ball.

The ruling meant a possible two Houston Astro runs were wiped off the board in the Game 3 loss to the Boston Red Sox, 8-6.

Maybe Betts does make that catch. Dude's been superhuman all season. West did see the play in living-color 3D, and OG's been on a roll lately.

But no matter what, there's no substantiation that the game's timeline woulda remained the same.

Who knows what timeline the rest of the game woulda taken?

After all, playing with a 2-0 deficit instead of a 2-2 tie -- and maybe more if that out was wiped away -- coming outta the first frame in a post-season game where every damn inning's treated like the ninth calls for lotsa adjusting. If we've seen anything this fall, it's that.

But that's just flying in the face of reality and, worse, calculus.

The game's outcome hung on numerous factors, whether or not which way the call went.

Over the course of nine innings, the Red Sox just played better:

There was enough here and now after the opening inning for both teams to make their case.

Boston's was stronger, and now they've got a 3-1 series lead. They're still raking and, in a raker's yard like Minute Maid, they've taken a liking to the dimensions as if it's a Fenway 2.0.

Maybe because it is. Those Crawford Boxes in left are nothing if not a mini-Monster:

For a team that was 57-24 at home, the BoSox are treating this field like a second home.

Houston can only hope Justin Verlander can remind them whose house it really is.