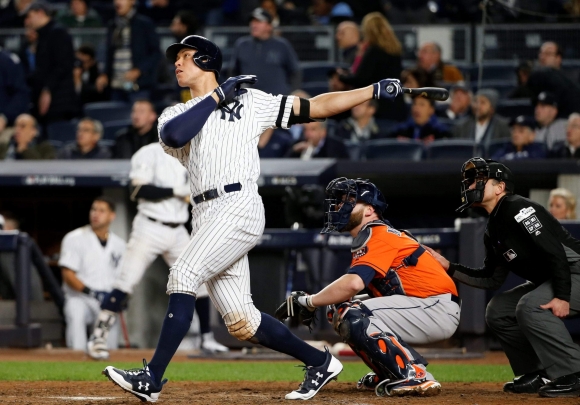 Lost in all the excitement to virtually everyone except his teammates -- and the Yankees' front office -- was Sonny Gray's role in New York's dramatic late-inning comeback in Game 4.

Dude tossed five innings of one-hit ball, holding the potent Houston Astros in check so that a winning rally was even a real possibility.

In so doing, Gray also had to overcome his fellow Yankees' three errors.

Since he's a lousy hitter, no.

Gray held the 'Stros scoreless until the sixth, when a walk and a catcher's interference call put two runners aboard. Even then, it was David Robertson who served up the Yuli Gurriel double that plated both of them.

Houston would add to it and tack on another in the seventh to take a 4-0 lead. That's when the Yankees woke up.

Aaron Judge has apparently seen enough Astro sliders to hone his stroke back to where it was most of the season. It showed in Game 3, and he sparked the long road to a lead in this one:

Dude's got all four burners lit, and when the Big Dog's on fire, so goes the pack.

Back when Tony LaRussa was managing the Oakland Athletics and invented the concept of a closer by taking starter Dennis Eckersley and telling him to go hard for one inning with his two best pitches.

Part of his reasoning was hitters wouldn't have much opportunity to adjust when they only saw him in short bursts, even in a series.

Lately, managers have been getting away from that fundamental concept.

AJ Hinch is one of them. The 'Stros skipper has been asking for more than three outs from the excellent Ken Giles, and it bit him.

He entered the New York eighth with two on and induced a ground out that gave up a run. Then, here came the Judge with a couple of buds:

For the second time in the playoffs, New York has wiped out an 0-2 series deficit.