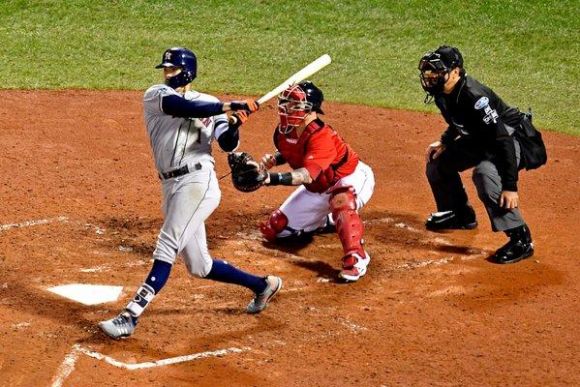 What the hell was that?

The 108-win Boston Red Sox spent most of the American League Championship Series' Game 1 looking like they were paying tribute to the 115-loss Baltimore Orioles.

The Houston Astros were innocent bystanders in their 7-2 victory, serving as straight men in a comedy of errors that took on breathtaking proportions.

For all but 'Stros fans, that was a candidate for highlight of the night.

Maybe BoSox manager Alex Cora saw where all this was going and decided to get himself tossed for arguing balls and strikes -- an obvious taboo and a willful decision -- in the fifth inning.

Houston had no choice but to post a 7-2 victory in this one:

The 'Stros seem to be taking this post-season thing seriously, defending their World Series championship and all.

Justin Verlander was his usual ominous presence, yielding only two runs on two hits while fanning six. He and the bullpen held down the fort until the four-run ninth that salted away the inevitable.

Assuming the Sox snap out of it, he'll have a shot to keep doing it for another two starts in this series.

For a club that compiled a 57-24 home record -- the game's best this season -- this shouldn't be much of an assumption.

At least, that's the assumption.