ALCS: All Verlander, All the Time 'til the Astros Walk Off 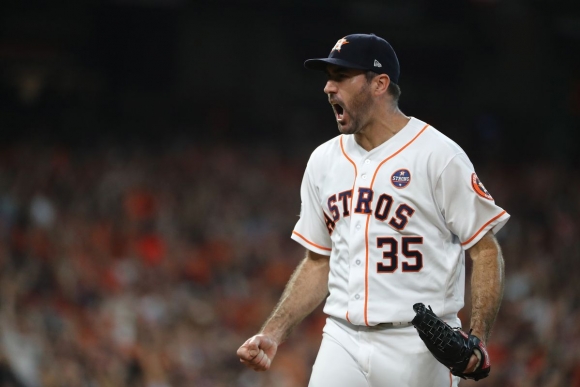 Two talking points have established themselves early in the American League Championship Series:

In Game 2, Justin Verlander was nothing short of dominant, going the distance with a 5-hit, 13-strikeout performance until the Astros' young stars brought home a 2-1 victory.

Pitchers come in all shapes and sizes, but trainers and kinesiologists generally agree that 120 pitches in a game is a slinger's red line. After that, recovery time must expand or the next outing could increase risk of arm and/or shoulder damage.

Verlander's total in this one was 124.

Dude was still popping leather at 96mph in the ninth inning, too. Incredible.

About Gardner's ill-fated attempt at a triple ...

It's not nice to defy the baseball gods. Long, long ago, they decreed from on high that you never make the first or third out at third base. The logic:

Gardner's the speediest Yankee, but when the 'Stros do the little stuff right -- Reddick knowing his bearings in advance and fielding with his bare hand to save milliseconds, for example -- dude and third-base coach Joe Espada took a needless risk in a close game ...

New York's run came on something you don't see every day.

With Aaron Hicks on second after a double, Todd Frazier followed with this:

It took a moment for everyone to realize this was a ground-rule double.

Until the light bulb went on, at least no one signalled for a jump ball.

As to Houston's first run, it kinda seemed like the Yanks are now 1-1 in kids and walls causing home runs:

Remember Jeffrey Meier back in 1996?

Gotta say, the 2017 playoffs are featuring an abundance of unique entertainment.

The only thing missing seemed to be a walkoff.

After coming back from that 0-2 deficit against Cleveland in the ALDS, New York is surely undaunted to returning home in the same situation.

But Houston's shown more consistency than the Tribe did.