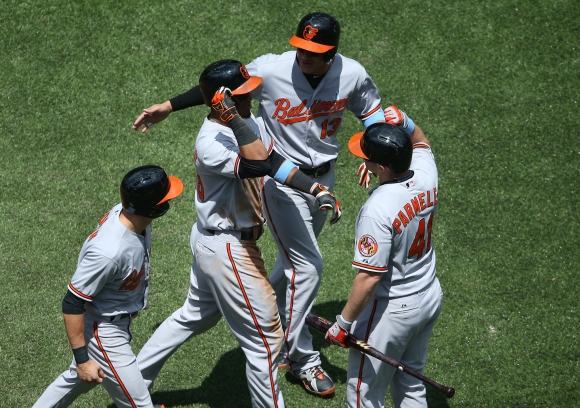 After a fairly eventful All-Star break -- the prelude, the game, and the wonderment -- MLB's set to fire up the balance of its season.

What with the extra wild card these days, four of the five teams in the American League East have a chance to make the playoffs.

At least one of the other divisions will no doubt tighten up, but odds are already strong the AL East will be a dogfight all the way to October.

The Baltimore Orioles start the charge where they've been most of the season.

All-Star third baseman Manny Machado leads the way for Buck Showalter's squad with a .322 batting average. Mark Trumbo and his 28 home runs also made the Midsummer Classic squad, as did catcher Matt Wieters, along with pitchers Brad Brach and Zach Britton.

Toss in Adam Jones -- is there a Mariners bump that the Orioles have sussed out? -- and the O's are well-placed to see more than the first weekend in October.

Even though the Boston Red Sox have limited pitching, have suffered injuries, and have been inconsistent, they're right in the mix.

In what he says is his final year, David Ortiz is having an MVP-type season, hitting .330 with 21 home runs and a mind-boggling 70 RBI.

Xander Bogaerts, Mookie Betts, Steven Wright and Jackie Bradley Jr made the All Star Game, which saw Big Papi get an unscripted sort of sendoff.

Boston just lost All-Star closer Craig Kimbrel for 3-6 weeks with a knee injury. As a result, Drew Pomeranz must be pinching himself, going from a confirmed non-contender in San Diego to a playoff race in Boston.

Toronto, the defending champion, may be the one team everyone fears, and after a slow start, the Blue Jays are making their move.

Any lineup with Josh Donaldson, Edwin Encarnacion, and -- even though he's been injured -- Troy Tulowitzki will have a say on who goes to play in October.

The Yankees have been underachievers all season, but if Hal Steinbrenner overrules GM Brian Cashman and they hold on to their big three at the end of their bullpen, you never know.

All Stars Dellin Betances and Andrew Miller, along with closer Aroldis Chapman, make every game a six-inning content if the Bombers are leading by then.

If their lineup ever starts hitting consistently and/or a dude like Jacoby Ellsbury plays near to the level of what they're paying him, watch out for the Yankees in the second half.

The other team in the division, Tampa Bay is out of it. However, that doesn't necessarily mean they'll be sellers at the non-waiver trade deadline this year.

The Rays always draft well and will be back in contention sooner than later. That's just who they are.