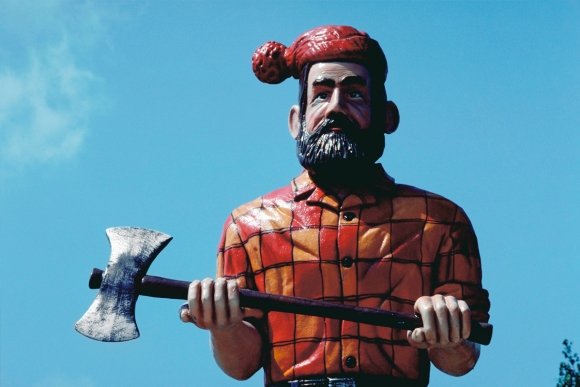 It's been firmly established that Aaron Judge is a human being of substantial size.

Of course, simply being a mythical giant doesn't automatically translate to success at the MLB level.

Fortunately, the New York Yankees' young outfielder has some skills at the plate.

Dude's currently tied for the MLB lead in homers with the impossibly good -- but possibly mortal -- Mike Trout.

Here's his 16th dinger, which came at the expense of the Oakland Athletics:

You will notice the oppo power on display and just how quickly that ball left the yard.

He's something of a throwback, as the game has evolved in a direction that doesn't always include the prototypical slugger who resembles a fictional lumberjack.

He calls to mind ax men of yore like the old Bash Brothers.

No, not Judge and Brett Gardner.

We're referring to those dudes from Oakland, particularly Mark McGwire.

Of course, he really had that Paul Bunyan thing happening in St Louis later in his career.

This is not to suggest any juicing impropriety on the part of Judge, but simply that the physical prowess is similar.

Anyway, this harsh treatment of baseballs should continue indefinitely.