AAA IronPigs Offer a Promotion to Die For 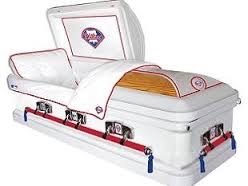 Finally, a prize that anyone can use!

The AAA International League's Lehigh Valley IronPigs are offering a free funeral -- $10,000 value at today's rates -- for one of their diehard fans.

Next of kin will likely be overjoyed, too, even if they don't know they're the next of kin yet. After all, it's possible a picture-of-health college student in his or her 20s could be the lucky stiff who wins this and doesn't collect until, say, 60 years from now.

The eternal attraction of baseball made its way to the Reichel Funeral Home in Northampton, Pennsylvania. Even though they're in an industry that never runs out of product, they did their bit for community support and became a sponsor of the IronPigs. The International League's general manager of the year, Kurt Landes, is clearly channelling the ghost of Bill Veeck, that gloriously rambunctious one-legged bane of button-down baseball who, among other things, brought the culturally seminal Disco Demolition Night to Chicago's South Side.

In case anyone had grave concerns that this prize package wouldn't be all-inclusive, rest assured that they did it right. Items include everything a soul needs:

There's more. The Northampton Memorial Co is contributing a $1500 headstone and Richmar Florist is putting up a $300 casket display.

So, how do you get a chance for this head start on your Stairway to Heaven?

You need to pen an essay -- 200 words or less -- describing your ideal funeral and why it should be free.

You've got two ways to get involved:

You must be 18 years or older to register. The prize is not exchangable and non-transferable.

Do know this is an equal opportunity deal.