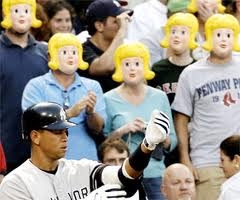 The Yankees signed Alex Rodriguez to a ten-year, $250 million contract in 2007 when most people thought that was a huge mistake.

Because it was a huge mistake. Huge.

From the minute Scott Boras announced during the World Series that year that A-Rod was opting out of his original Yankee contract, Rodriguez has had very few good moments, except for contributing to the run-up of New York's championship in 2009. Now we find out that was aided by PEDs as was most of his career.

Rodriguez is now embroiled in a controversy with the Yankees over his latest injury, a quad strain that followed his second hip injury. This follows the Biogenisis mess, where rumors are surfacing that A-Rod could be suspended soon, joining fellow cheater Ryan Braun with maybe even a longer sidelining.

The question remains, will he ever play with the Yankees again? This man is nothing but a liar and a cheater and even the Yankees have had enough of him. Did anyone beleive that when Rodriguez came clean about his steroid use in 2009, that the only time he was using was when he was in Texas? He cheated in Seattle, Texas, and New York, and he should be fined, suspended, and finally thrown out of baseball so we don't have to hear from him anymore.

Since A-Rod 'came out' in 2009, he has steadily declined. He was horrible in the 2010 playoffs, injured for most of the 2011 season, and embarrassing in last  years' post-season when he was ultimately pinch-hit for and benched.

In the old days, A-Rod would have been back in the lineup at once after this quad injury, especailly with the Yankees struggling and fading in the standings. However, New York does not want him near the lineup and is actually hoping that the suspension is announced soon so they can start saving some money on him.

Braun got 65 games, and the Yankees are hoping that A-Rod gets 165 games and misses next year, also. Scores of people in and out of baseball think he should even receive a harsher punishment because of all the lying and cheating.

One can only think of George Steinbrenner during this time. He knew what it was like to point a finger to save himself. But even then, the picture remained clouded.

Perhaps it was karma that his legacy included signing A-Rod.