A-Rod Caught with His Foot in His Mouth 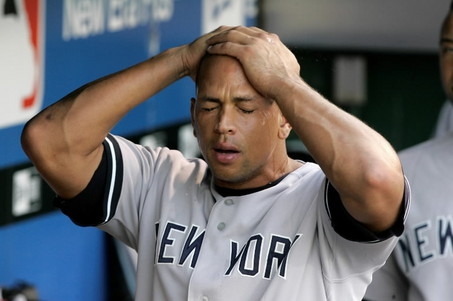 It's no secret: Alex Rodriguez is beyond question one of the biggest divas in MLB.

But A-Rod has surpassed his usual standards yet again, setting an all-time high -- or shall we say low -- in divadom.

The circus surrounding Rodriguez never seems to end. He was linked with the Biogenesis scandal, and once the smoke clears from that, he very well could be banned from baseball. The Yankees front office and organization is tired of his injury woes and poor publicity. As the Bronx Bombers sink further in the standings behind their hated rival, the Red Sox, the last thing they need is the sideshow that is the A-Rod debacle.

However, that's not what had Yankees GM Brian Cashman seriously miffed. It’s A-Rod’s recent stunt on Twitter that had the batting gloves coming off.

According to Rodriguez, he has been cleared by his doctor to once again begin baseball-related activities. The fans usually get this kind of information from a press release, but A-Rod chose to divulge it on Twitter rather than allow the Yankees organization to announce the news themselves. What happened next is hard to believe.

Once Cashman heard the news from Rodriquez’s Twitter, he blew a gasket.

"You know what, when the Yankees want to announce something, [we will]," Cashman said. "Alex should just shut the f--- up. That's it. I'm going to call Alex now."

Cashman did not stop there, though, he shot down Rodriquez’s claims that he was ready to start playing baseball, publicly undermining A-Rod in full view of MLB.

"He has not been cleared by our doctors to play in rehab games yet," Cashman said. "He's getting closer. There's no doubt about it. But we don't have a date for him to start playing games yet. It could be July 1. It could also be July 5 or maybe June 25."

At the old age of 37, Rodriguez is no spring chicken. With the possibly of a ban looming over his head and his recent stunts to aggravate the Yankees, his time in The Show -- or at least, the Big Apple -- may be coming to a close if he does not watch himself better than he has