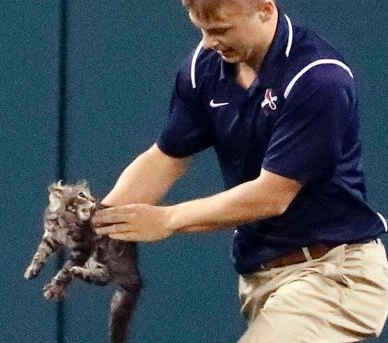 Professional athletes are a superstitious bunch.

Of this group, baseball players may have the most quirks in this regard.

This would no doubt explain the magic of the rally cat.

Yes, you read that correctly.

What's so heroic about a cat running on the field during a game and then viciously attacking a member of the grounds crew?

Well, this happened on the next pitch:

That is pretty freaky.

It's difficult to articulate the mystical powers of the rally cat.

You simply must believe.

By the way, that Yadier Molina grand slam put St Louis up, 8-5, over Kansas City, and they won by the same score. It moved them to within 1½ games of the first-place Chicago Cubs in the tepid NL Central, where a club needs to win the division or face an early winter.

Of course, the rally cat is not to be confused with the Wherever-They-Are Angels' rally monkey. 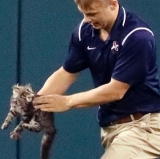 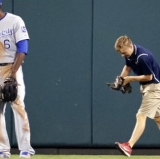