A Boxing Match Breaks Out at a Baseball Game 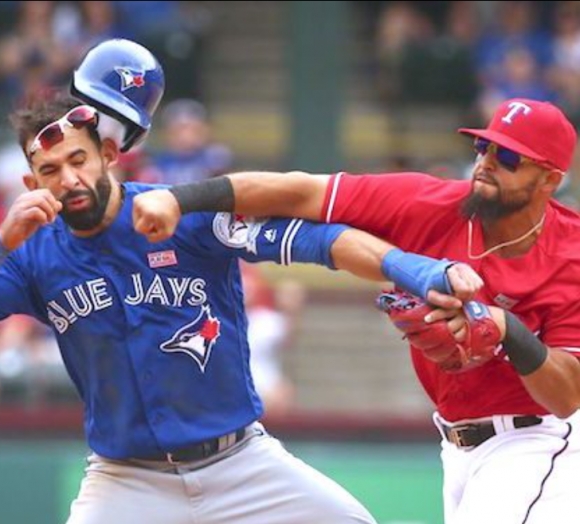 To be more specific, the seveneth inning saw the most action packed part of the playoffs.

It all started in the top of the inning when Russell Martin threw the ball into Shin Soo Choo’s bat, allowing Rougned Odor to score the lead run.

At least, that's what happened after the umps reviewed the play, as they previously waved it off as being a dead ball.

The Rangers, now up 3-2, had Cole Hamels return to the mound to finish off the Jays in the bottom half of the inning.

To Hamels' credit, he wasn't the reason for Texas' inning from hell.

The burden of blame would fall on the shoulders of Elvis Andrus, who figured prominentlyh in the Rangers' three errors that inning.

The Rangers, who had taken the lead on a wacky miscue, saw the game tied at 3 after a lazy pop flew over the head of Odor.

The next two Blue Jays failed to bring home the lead run, which set the stage for Joey Bats to get dramatic.

All posterity remembers, though, is the bat flip seen ‘round the world.

José Bautista's blast sealed the Jays' win, and the Rangers were rather pissed.

To be specific, they were none too thrilled with Bautsita’s flip.

The Rangers' anger would continue to fester throughout the off-season. No doubt they circled this weekend on their calendar when the schedule first came out.

The Sunday game in Arlington would be the last time the Rangers and Blue Jays would face each other in the regular season. In other words, it was a chance for vengance without fear of repercussion.

Up 7-6 in the top of the eighth, Texas reliever and former convict Matt Bush hit Mr Bats. This being Bautista’s likely final plate appearance, this 97mph plunking came as no surprise.

What followed, though, everyone should've seen coming.

A Justin Smoak grounder enabled Bautista to run to second, where he came in with a hard slide at Rangers second baseman Rougned Odor, who was probably upset that dude had almost Ruben Tejada’ed him.

That led to his hard stare at the Blue Jays star. But why stop there?

Odor then smashed Mr Bats with a Mike Tyson-esque hard right to the face.

On cue, the benches and bullpens cleared, as the culmination of months of anger erupted from a club intent on a team brawl.

The Rangers went on to win the game, though they were probably happier to win the fight.

Yowza! That’s got to hurt.

Now the Commish gets to deal with this puilistic display of a baseball game. Suspensions are surely forthcoming.

In a way, it was worth it to more than the Rangers. This was actually a basebrawl where someone actually threw a punch.