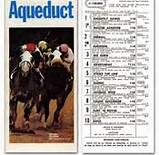 We are getting closer and closer to the Kentucky Derby, the most coveted prize in all of horse racing. It is always run on the first Saturday in May, and it is always run at Churchill Downs. The weeks leading up to the Derby are almost as exciting as the big race itself.

One of the key prep races for the Derby is the Wood Memorial at Aqueduct Racetrack in Ozone Park,  New York.

The Wood Memorial, year after year, attracts some of the best 3-year-olds. This list includes: Secretariat, the greatest race horse of all time, who captured the 1973 Triple Crown; Seattle Slew, the 1977 Triple Crown winner, and Fusaichi Pegasus, the 2000 Kentucky Derby champ who is the last horse to win the Wood Memorial and then get the roses at Churchill Downs.

Backbone won the inaugural running in 1925 with jockey Ivan H. Parke in the saddle; Parke also won the Wood  three times as a trainer. Gallant Fox won the Wood in 1930 before sweeping the Triple Crown. Count Fleet became the next Wood winner in 1943 to capture all three legs of the Triple Crown.  This amazing feat continued in 1946 with Assault.

Secretariat, as stated above, is the greatest race horse of all time and graced the cover of Time magazine. In 1973, as a huge favorite, Secretariat finished third in the Wood Memorial behind his stable mate, Angle Light. Secretariat rebounded in the Kentucky Derby, and was on his way to winning the Triple Crown. It would mark the first Triple Crown winner in 25 years.

The list of Wood Memorial winners to double up with a Kentucky Derby includes: Foolish Pleasure in 1975, Bold Forbes in 1976, Seattle Slew in 1977, who became the 4th horse to win the Wood and the Triple Crown, Pleasant Colony in 1981, Thirty Six Red in 1990 and Fusaichi Pegasus in 2000.

Eddie Arcaro leads all  Wood Memorial jockeys with nine victories. Angel Cordero, Jr. has captured the Wood on four occasions and Johnny Longden, Bill Shoemaker and Mike Smith have all won the race three times. Sunny Jim Fitzsimmons leads all trainers with seven Wood Memorial victories. Lucian Lauren, Secretariat's trainer, is next with four followed by both Nick Zito and Ivan H.Parke with three wins each. Belair Stable, Wheatley Stable, Greentree Stable and Cornelius Vanderbilt Whitney have all won the Wood four times as an owner.

Verrazano, the 4-5 m/l favorite, is the horse to beat. He is currently the No 1 ranked 3-year-old in the country. He is undefeated and is conditioned by top trainer Todd Pletcher. Verrazano is coming off an impressive three-length victory in the Grade 2 Tampa Bay Derby on March 9th. He was a much the best winner and stamped himself  as a viable Kentucky Derby horse. He will break from pp 8 with Hall of Famer John Velazquez in the saddle. Verrazano will be making his first start outside Florida this Saturday.

Vyjack, also undefeated in four career starts, is the main threat to Verrazano. Vyjack will break from pp 5 and will have the services of Joel Rosario, fresh off his score in the Dubai World Cup aboard Animal Kingdom. Vyjack is coming off a good looking come from behind score in the Gotham Stakes on March 2nd at Aqueduct. Vyjack is the second choice on the m/l at 4-1.

The Wood Memorial has an approximate post time of 6.28pm. The race has attracted a field of ten and can be seen on NBC Sports Network from 6.00pm - 7.30pm.