The Stick's Curtain Falls, and Baseball Stars Were There to Wave Good Riddance 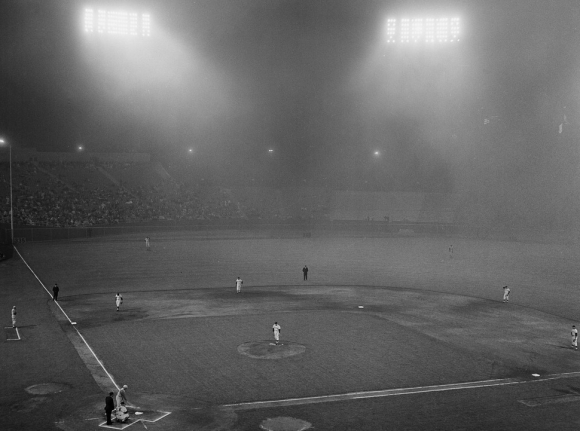 It was a stadium born of scandal to house a franchise that was ripped away from its original home.

Perhaps it was a match made in hell.

Candlestick Park's run is ending with the San Francisco 49ers, who are moving next year to new hi-tech digs in Santa Clara. But it came to life to host the Giants. Wheels had to be greased to expedite the construction, and that meant palms were greased in the process. And when it was ready, observers agreed on one thing.

Other than Forks, Washington -- site of the Twilight movies and one of the rainiest spots in the USA -- Candlestick Park couldn't have been built in a worse location.

The constant winds rushing in from the ocean are so prevalent that legend has it Stu Miller was blown off the mound in mid-delivery during the 1961 All-Star game. The slight (5-11 & 165) righthander denies it, but even he admits a strong gust affected his motion.

Hardcore Giant fans embraced the conditions, or at the very least, were sardonic about them:

Just possibly the ugliest incident in baseball occurred at Candlestick, when future Hall of Famer Juan Marichal attacked Dodger John Roseboro with a bat in retaliation for being plunked. This was back in 1965, and all he got was a nine-day suspension.

With this sort of pall hanging over the park, it's no wonder the Giants never won a World Series there, especially in 1989 when Mother Nature rose to the occasion with an extreme presence, as evidenced in the broadcast:

Even with the boondoggle, Candlestick Park was built to survive earthquakes. This could have been its finest moment, and when the Series resumed, it gave the umpires an opening to make light of the near disaster:

So yes, this was the home park for Mays and McCovey, and when the Niners moved from Kezar Stadium, for the likes of Montana, Young, Rice, and Craig. But Candlestick Park won't be missed.

The Giants and their fans now have one of the best venues in baseball, and pack the place on a regular basis. Some 49er fans may grumble about the drive to and from the Silicon Valley, but even they should welcome the upgrade in comfort and shelter from the conditions.

Candlestick will get smithereened next year to make way for yet another ersatz urban village development. Expect no tears to be shed, but if any are, at least the people frequenting it will no doubt be carrying umbrellas.