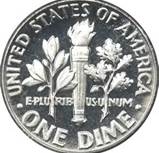 Do you dream of being a millionaire? Do you have a dime?

That's right, one dime can win you nearly $2million!

This Wed 3 April at Gulfstream Park in Hallandale Beach, Florida, there is a Rainbow 6 carryover of $1,787,447.00. What is the Rainbow 6?  It's a 10¢ wager that is paid out when there is only one unique ticket with all six winners on the last six races of the day.

Can you imagine becoming a millionaire with an investment of just one thin dime? It's unimaginable, but it's the reality at Gulfstream Park.

To put this in perspective -- and according to the article All About the Roosevelts, Baby by Carrie Davis -- here is what a dime has been able to purchase over the years:

What can a dime get you now? How about 10 minutes of parking-meter minutes in most major American cities.

Just think what the late, great James Brown could have done with it!

Gulfstream Park will conclude the season this Fri 5 April. There will be a mandatory payout in the Rainbow 6, so that is the best time to play.

The Rainbow 6 may be a long shot, but for a dime, it's worth a try.