Tapwrit Wins the Belmont Because What the Hell, Why Not? 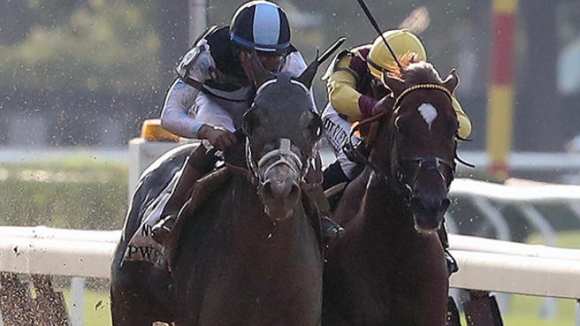 Being the Triple Crown's third jewel is a boom-or-bust proposition.

With Kentucky Derby winner Almost Dreaming falling in the Preakness, this year's Belmont Stakes was not only a bust, it carried a huge dose of hype repellant.

The race was more notable for who wasn't in it.

Tapwrit decided to show up.

Bought as a yearling for $1.2million, he went off at 20:1 and became an also-ran in the Kentucky Derby. He'd never won a race outside of Florida. It was his triumph in the Tampa Bay Derby that put him in the Triple Crown field, but that's about all that was expected of him.

At 6:1, trainer Todd Pletcher's colt had the fourth-best odds going into the gate. That's when jockey José Ortiz, who's had considerable success on New York tracks, took over:

Tapwrit also endeared himself to the punters:

As to the funky stuff:

Even in the Big Apple.