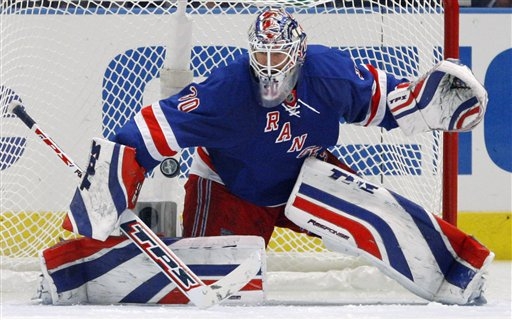 It may well still be, but there was a hint that 2015 may have seen the window closing on Henrik Lundqvist's shot at a Stanley Cup ring.

The New York Rangers got dominated by Los Angeles in the 2014 Finals and then were upset by Tampa Bay in last season's Eastern Conference title series.

But look who's become the Metropolitan Division pacesetters, claiming recent games against elite teams as part of their nine-game run:

The Blueshirts still have wheels and hold their own physically, but yet again, it's been Lundqvist holding down the fort, allowing the offense to be more freewheeling.

In that winning span, King Henrik held the opposition to a lone goal five times, surrendered two to the Capitals, and three each to the Blues and Maple Leafs.

The Swede put on another show between the pipes last night against the club that dashed their Cup dreams last spring, Tampa Bay. But this time, trying to make one goal stand up until overtime wasn't in the cards:

For as hot as the Blueshirts are now, that may be a lost point they'll regret in April.