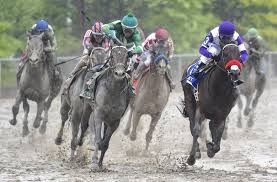 And not because of the muddy track, as that's what American Pharoah negotiated to win last year's Preakness. So no excuses for Nyquist there.

It was mortality being on public display, in full view of a track record 134,000 spectators:

Of course, the show went on:

Which is more than can be said for the Belmont Stakes. For the 29th time since 1963, it won't have a Triple Crown build-up as part of its allure.

Instead, it'll serve as the rubber match between Exaggerator and Kentucky Derby winner Nyquist.

Let's just hope everyone stays careful out there.