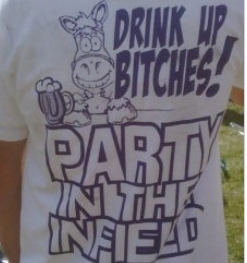 The vast majority of spectators at Pimlico got what they wanted yesterday.

California Chrome came through for them, too.

Where the Kentucky Derby goes to great lengths to emulate Royal Ascot, the Preakness is more along the lines of a NASCAR weekend.

And in past years, they've truly outdone themselves:

But fittingly in 2014, the only one to take center stage from the festivities was California Chrome, where only five fillies have won the Preakness -- only the second since 1924 -- without first dominating the infield.

As a 2:3 favorite, California Chrome was never going to produce a big payday at the tills. That will come if he prevails in the Belmont Stakes, when an impressive number of punters would be in position to cash their futures tickets.

That race, of course, is a 1.5-mile gallop. Given his finishes in the first two jewels of the crown, the added distance doesn't appear to be a major concern, but he will undoubtedly be matched against a field well accustomed to it.

As to the crowd, it will feature the buzz of high expectations common in New York. Meanwhile, in Baltimore yesterday, the double-buzz of celebration and a challenge fulfilled extended long into the night.