One Favorite, Two Mudders Finish in the Kentucky Derby Money

Published on 7-May-2017 by Alan Adamsson 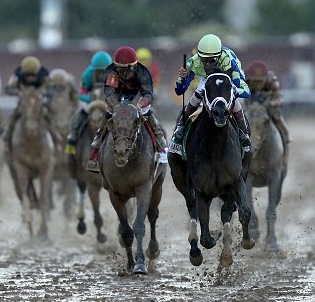 For the fifth year in a row, chalk won the Run for the Roses.

A burst of speed outta the gate was the difference for 9:2 favorite Always Dreaming, charging from the No 5 position into a space where he couldn't be crowded into the pack.

Jockey John Velasquez then steered the colt behind pacesetter State of Honor until the final turn, when his mount pulled away.

It was just like how they ran and won the Florida Derby.

We expect to see their trainers shopping online at Fanorama any time now. Somebody in their entourage could probably use a clean shirt.

Velasquez might be shopping elsewhere, as in anywhere he wants.

And while the hat tradition was lifted from England's Royal Ascot, the well-heeled in attendance had no issues keeping up appearances on this side of the pond:

Now, it's on to Pimlico and the Preakness in two weeks.

It checks in at 13⁄16 miles, which is a half-furlong shorter than the Kentucky Derby. The distance shouldn't be an issue.

It's the turnaround time that bears consideration. Always Dreaming has never had less than a month to recover from a race.

Clearly, trainer Todd Pletcher has always had a plan in place. If it works, he'll have prepared history's 13th Triple Crown winner for a future of horsie heaven.

That's surely how Always Dreaming would view going out to stud.