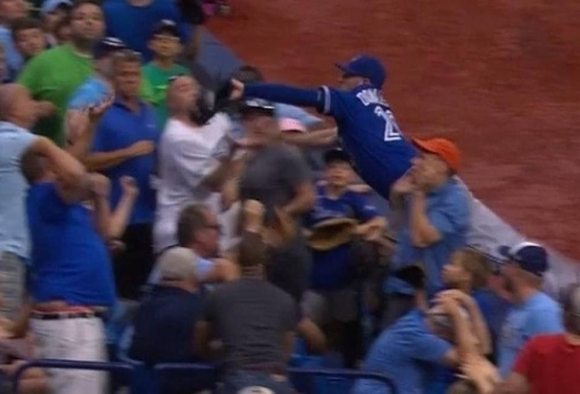 The vaunted Toronto Blue Jay offense was good for only one vaunt this afternoon.

Chris Colabello's dinger was all they needed to claim a 1-0 decision in 12 innings down at the Trop.

That blast will share the headlines with Marco Estrada's second straight outing of no-hit ball over a seven-inning stretch. And this time, it had all the makings of a perfect game if he could seal the Tampa Bay Rays for a third run through their lineup. And assuming, of course, Toronto could give him a measly run.

But he didn't, and they didn't.

However, in the seventh, 3B Josh Donaldson did all a human could do to keep the no-no intact.

First, he did a Jeter and followed a foul into the seats:

The skill involved in that play -- besides sheer kamikaze athletic ability -- was Donaldson's awareness of the fast-approaching barrier between the stands and the field of play. He controlled his stride, kept his body poised for the ultimate leap, and shifted his vision between ball and obstacle.

The impressive part was the number of Blue Jays fans at the Trop to help break his fall.

However, from a pure skill standpoint, the third baseman's attempt to preserve the perfect game was an even better display:

Pros are well into the throwing motion before the ball gets to them, but the speed and accuracy of Donaldson's mechanics provide a moment of subtle awe:

Dude's always had more than a bat.

About the only thing Donaldson doesn't possess is tact, which is why he's a Blue Jay and not an Athletic. Must be a thing with how Toronto acquires elite third basemen.