Jigger Jockey Gets 10-Year Suspension for Shocking His Horses 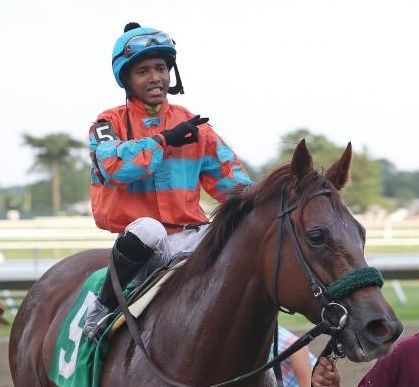 Not that a buzzer hack in horse racing is a new phenomenon or anything.

The devices are known as jiggers and they've probably been around as long as small batters have.

What is new is there's now much more sophisticated methods to monitor their presence.

There's also a sorta low-tech way, which is often as much or more effective.

That's what did in jockey Tomás Mejia.

After a race at New Jersey's Monmouth Park on Fri 3 Sep, dude was snapped by a bystander stealthily passing something to one of his attendants after riding Strongerthanuknow to victory in the day's seventh race.

It was a stirring come-from-behind effort, paying $11 to win. Afterward, notice the dude carrying a blue bucket before rider and horse enter the winner's circle for the weigh-in. Follow the bucket:

Someone else noticed, too:

Rider, Mejia clearly passes 'something' to person with the blue bucket. (see video)
A short 5 furlong race on a pleasant day.
Blue bucket guy quickly sponges Strongerthanuknow neck as if it ran a gutbuster 12 furlong race in hot weather! (left neck is where it would have buzzed) pic.twitter.com/8SipfRD3B5

Proof yet again that the word fans comes from fanatics, and they don't miss much when they're totally immersed in their sport.

Here's a close-up from a photo that shows Mejia has more than reins in his hand, and it looks amazingly like it's got a couple of electric prongs:

Once the Monmouth Park stewards laid eyes on this, they immediately issued an edict suspending Mejia from any more racing, at their ground or anyone else's.

Of course this is despicable, especially since the horse doesn't have any say in the matter.

What's more, it's not as if it's gonna automatically respond to a shock during a race. A horse has gotta be trained to speed up its giddy-up when it feels a shock to the neck. That's a lotta jolts to get ready for the track.

And let's be real, Mejia and his attendants weren't doing this in the vacuum. Sooner or later, trainer Jorge Duarte Jr and stable owners Colts Neck LLC will have some 'splainin' to do.

It's better than the straps that broncos and bulls get tied around their nards in the rodeo, which is what makes them pissed off enough to start bucking -- try it sometime -- but not much.

If he's been using a jigger, it's totally logical to extrapolate that the only difference between him and lotsa jockeys is he got caught. Look no further than baseball's steroid scandals to justify that sorta logic.