Here's Your Chrome Conspiracy: The Belmont's a Longer Race 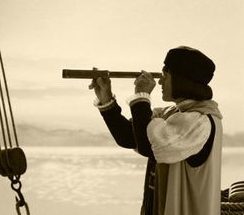 Senator Harry Reid will tell you not everyone from Nevada is like Cliven Bundy or Sharron Angle.

And the reality is that Area 51 is merely a black budget testing site for the likes of Stealth bombers and is a UFO-free zone.

But that state has its share of the noisy fringe, and it looks like California Chrome's owner is one of them.

Give Steve Coburn credit, though. He's not one for shallow platitudes. Just shallow rationalizations:

And that's what a major network interviewer looks like when he's trying to get the hell away from an interviewee who's gone 'way off the grid.

Close scrutiny of the Belmont Stakes race footage -- which was not taken by Arnold Zapruder -- seems to indicate that there was no grassy knoll on the track. Suspiciously, though, there was a General A-Rod; never take anything for granted when the name A-Rod shows up.

Closer scrutiny seems to indicate that this race took a mile-and-a-half to run. There's a reason the Belmont Stakes is the final jewel in the crown -- well, that and the fact it's located in a global media center -- and nasal strips or no, it's a tough task for steeds unaccustomed to the extra length.

It's not enough that more than one racing reporter expressed doubts -- logical doubts -- as to why California Chrome wasn't the horse of destiny. No, there must be some sinister force at work when real life refuses to imitate fairy tales, even though everyone -- like the packed house at Aquaduct yesterday -- expected a coronation to take place.

Maybe that's why the Triple Crown has the status and -- dare we say it? -- the mystique that it does.

But conspiracy theories are so much fun when there's an agenda to be promoted. And Steve Coburn had one. He struck gold ... well, chrome ... by turning an obscure $8000 breeding into two famous victories. He's already millions to the good. So good, in fact, his mental process has already evolved into that level of paranoia that the greedy get when breaks don't go their way.

Well, time to fight fire with fire. Maybe there was  a conspiracy, but maybe it was what must have come together to get an unknown horse to the brink of immortality. And maybe its logic makes as much sense as Coburn's:

And maybe Coburn should just run the rest of his horses' races at Area 51.