Boxing for the Roses

Published on 4-May-2013 by Steve Soprano 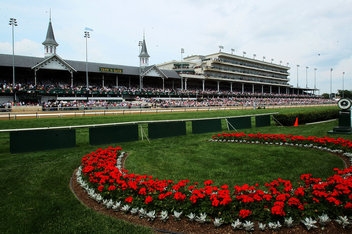 One of my favorite plays for the Kentucky Derby is the four-horse exacta box.

It's not always recommended strategy because the risk is twelve times the bet (meaning the $1 exacta boxing four costs $12), but in this race, I usually always give it a roll. They exacta payouts in this race usually always make it more than worth the risk, and hey, it's the Derby!

With that in mind, I've got four to watch. Whether you want to box them in the exacta, tri, superfecta, or just pick one and play it, here are the four I will be counting on:

First, I am kicking out Goldcents (#8) who has jockey Kevin Krigger looking to be the first black jockey to win this race in over a century. While it would be a great story and great for the sport, Goldcents doesn't know Krigger is black and may be too fast to notice anyway. The concern is the Derby distance for this horse. He has great speed, and that causes concern coming down the stretch at this length

I am looking at Itsmyluckyday (#12). I like this horse because of experience; he's the only with 10 starts in the field.  The résumé of finishes isn't bad either, with wins in the Gulfstream Park Derby and the Holy Bull. Then, after a two-month layoff, the Eddie Plesa Jr-trained horse finished second in the Florida Derby.

Verrazano (#14) can't be overlooked having won every start he's made. Now, that's only four races, but he has done it both leading the pack and coming from off the pace. The combination of trainer and jockey -- Todd Pletcher and John Velasquez -- also makes this a great shot. This horse is a strong threat to be in the money, and the money he will bring won't be huge as a 4/1, but count on him being close and maybe bringing one of my longer shots with him.

Orb (#16) doesn't necessarily get a bad draw because mud may hamper the inside horses more, but it may not matter.  Like Verrazano, Orb has won 4 straight including the Fountain of Youth and Florida Derby.  Orb's trainer Shug McGaughey has put 6 horses in the sport's most prestgious race, and hasn't had a single winner.  That could change today.

Lastly, Java's War (#19) could factor in the money and will bring a nice price, with morning line odds of 15-1.  This horse has already shown the ability to win when it counts, winning The Blue Grass after a very shaky beginning.  Don't be surpised if Julien Leparoux has this one in the mix as they come down the stretch.