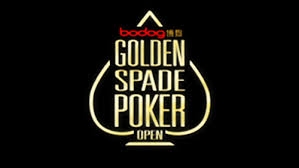 Running from 9 September to 3 November, the Golden Spade Poker Open is generating excitement in the online poker community.

Thanks to a massive prize pool of $1.5million guaranteed, players are hitting the felt and ready to strike gold.

The Golden Spade Poker Open is one of the biggest online tournament series of the year. It's easy to join Bovada now and grab a cut of all that cash.

With over 100 events, the GSPO is made up of two main parts:

There are over 2,000 satellites to play in, with some running daily for as little as $1.

You can choose your own path to gold by playing in the Cheap Seats, Quarterfinal, and Semi-Final qualifiers.

The Golden Spade Poker Open gives you 1,000,000 reasons to get in the game, so join Bovada now and go for your gold!