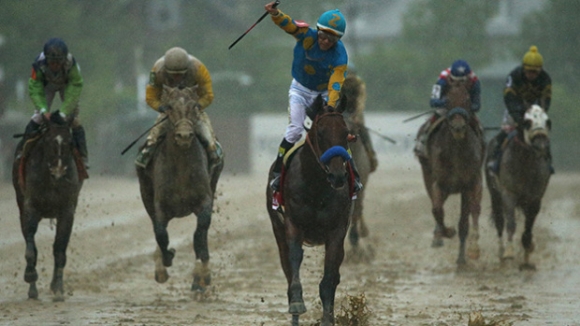 Bob Baffert said this was the easy jewel.

And nothing Mother Nature could do would change his mind.

And after five Preakness wins, the dude should know.

What with the rain and slop, it was tough to see if Kentucky Derby winner American Pharaoh even broke a sweat. This race was a mere prance in the park for, potentially, the first Triple Crown winner since Affirmed in 1978.

Still, there was a subtle hint of the challenge to come in Baffert's comment.

It's not just the distance at Pimlico to which Baffert was referring. Lately, it's been the done thing for many contenders to skip it, resting up for the Belmont. That wasn't the case this time, though, as the other two thoroughbreds finishing in the Kentucky Derby money -- Firing Line and the pre-race fancied Dortmund -- showed up.

But that's about all that could be said of them.

So the drama and anticipation shift to New York, where it was always destined to be in 2015. If there's to be an upset in American Pharaoh's Triple Crown quest, the only burning question left is who will do it.