A Moment of Doubt, and Then a Rout

Published on 3-Mar-2016 by Alan Adamsson 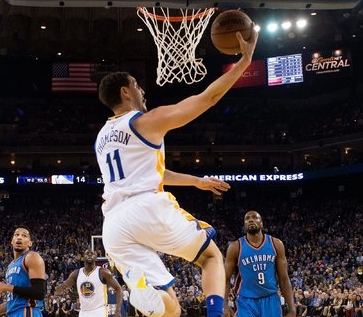 It could be that the actual question here is how did Golden State lose five games?

Oklahoma City threw all they had at the Warriors last Sat 27 Feb and still lost by three.

But it seemed like the Thunder was on to something. Maybe they were, because they were up by nine in the third quarter tonight and still had a lead early in the fourth.

Then again, maybe they weren't.

The Warriors have a few seasons to go before a dynasty label can be affixed. However, they've got a shot.

They look like a team from bygone years, from farther back in time than the Lakers' Showtime era.

Recall the Boston Celtics of Bill Russell, Bob Cousy, KC Jones, Sam Jones, and sixth-man John Havlicek, who capped an incredible run in the 1960s when Russell served as player-coach:

What's the similarity between these two clubs?

Frankly, the Celtics were nobody's team in a sense that we don't see these days. The stars didn't clamor for labelled leadership; they saw themselves instead as part of the winning formula. And the others step up as needed.

A team with a team concept! It's a wonder of nature.