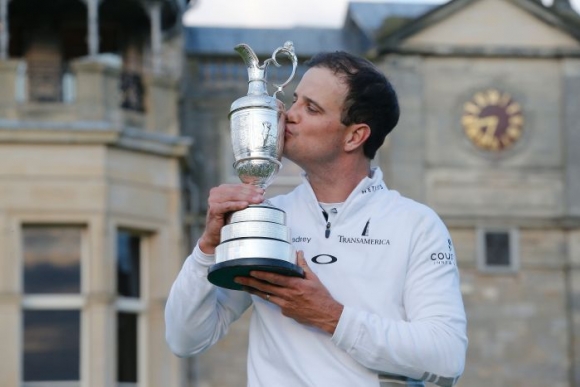 OK, so Jordan Spieth can fend off only so many Johnsons.

Actually, Dustin fended himself at the US Open, while Spieth was dramatic under pressure.

This time around, at the British Open, it was Zach who picked up the Johnson gauntlet, while Spieth was dramatic under pressure.

But he wasn't dramatic enough to maintain his charge at history:

A disastrous double-bogey at the par-3 eighth hole was the dagger for Spieth. A misjudged drive left him with forever to go, a term that he tragically took literally:

Suffice it to say he still needed three pops at it to get down from there. So all this heroic birdie on the 16th did was minimize the overall damage:

Because the dastardly 17th was still there to take a toll that only the most resourceful would overcome:

Meanwhile, Zach Johnson had the 30-foot rhythm and his caddy had the moves on 18:

Then, in the culmination of a three-man playoff over a four-hole aggregate, suffice it to say that Zach didn't do a Dustin on the tap-in and stood by as the claret jug came to him:

Baseball is notorious for red-headed stepchild stats, but golf's versions usually limit themselves to select company. So when Zach Johnson joins Jack Nicklaus, Tiger Woods, Sam Snead, Seve Ballesteros and Nick Faldo as the only players to win the Masters and a British Open on the Old Course, that is legitimate history.

But the quest for golf's Holy Grail -- a calendar Grand Slam -- remains just that, and it'll take a miraculous mix of skill and fortune to achieve, if ever.