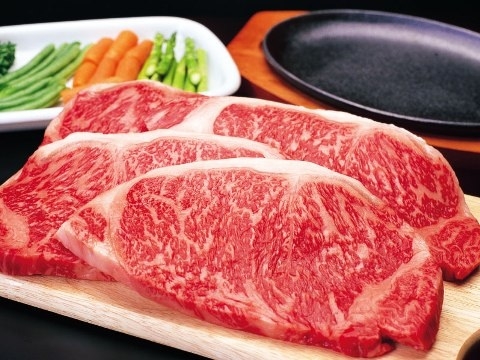 Where's the beef?
Never again will I complain when it takes more than 22 minutes for my steak to be brought to me.
Why?
Luke Donald won the Dunlop Phoenix tournament in Japan last November, and part of his winnings included a Miyazaki cow. But it took him over six months to receive the meat. Before you roll your eyes and click the article, he didn't win a regular old cow like you see on the Chick-fil-A commercials.
The cattle in this area are supposed to be very special. It's reported that the cows are treated almost like royalty; they eat the best, drink beer, get sake massages and are even called by name.
Wow! I would love to be a Miyazaki cow. Except for their ultimate fate, that is.
Why did it take so long to get the beef?  Well, it seems that the winner usually sells the cow immediately for cash, but Donald is said to be a food connoisseur and wanted his meat. But that's where the trouble started. Donald had no idea about the magnitude of what he had won and the difficulty in getting it into the USA. Japanese customs fficials said they would not be allowed to ship the physical cow to America.
Then came what I think was a compromise. Donald was told that he didn’t actually win one cow but that his cow was actually cuts of meat and he would have to determine which cuts and how many pounds of each he wanted.
After months of negotiating, the two sides finally reached an agreement. To make a long story less long, Donald finally received 200 pounds beef.
Its net worth?
$80,000
Best part of the story: Donald said it was “definitely the best beef I’ve ever had."
Which I guess was worth the wait.
DAILY UPDATE