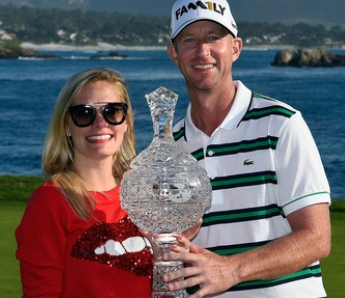 It'd be tempting to say the golf world's No 447 player rose from the ashes to top the PGA's best.

Frankly, though, Vaughn Taylor didn't even have enough ashes to arise from.

Dude had been 11 years without a title -- and only had two -- and spent the weeks prior to the Pebble Beach Pro-Am missing the cut in a Panama event and hitting the loo hard enough in Colombia to pull out of a tournament there.

So it's still safe to say Taylor rose from something.

Impressively, he had to emerge from an alternate's spot in the pre-tourney rabbit round just to earn a tee time in one of the tour's early-season headline events, Taylor was still flying under the radar after 54 holes, six strokes behind leader Phil Mickelson.

And then Sunday happened:

No one appreciated Taylor's $1,260,000 paycheck for the week more than his wife, Leot. She'd supported him through the thin times and well understands the impact a two-comma bank deposit can have. No wonder she went to pieces when Mickelson missed that putt.

Now, Taylor can afford the luxury of a pro bag, among other perks. Those would include a two-year exemption on the PGA Tour and an invitation to the Masters -- held in his home town -- and the PGA Championship.

Those mere appearances will help his wife get through the supermarket a few times, too.