US Open: Mickelson's a Sprinter; Who Knew? 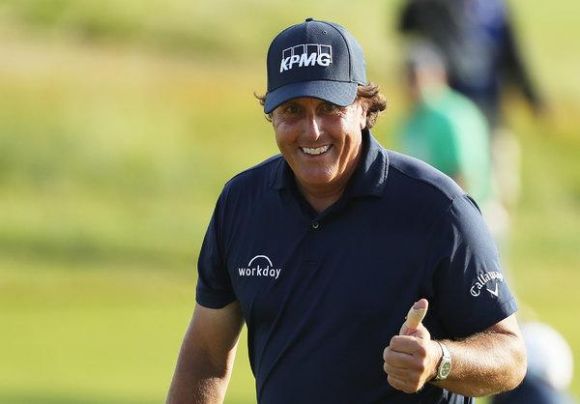 Maybe it's time to set up drug testing on the USGA parties responsible for setting up this year's US Open course.

The only thing they didn't do was fashion a few holes outta the Shinnecock Hills parking lot.

Frankly, it's doubtful many golfers this weekend would be able to tell the difference between greens there and the greens they're being forced to negotiate.

It was only a matter of time before someone snapped.

Sure, there was young whippersnapper Zach Johnson sending a very public message to the Old Boys that their course prep sucks:

Zach Johnson seems to have made his mind up on the ‘have they lost the course’ question @NoLayingUp @TronCarterNLU pic.twitter.com/E9VkWvPMAL

Dude spoke for many, but Ian Poulter piled on, anyway.

Is that an apology ?
Just grow a set of balls and say we £€¥#ed it up again...
You don’t get mulligan’s in business at this level. how can this team keep doing this without consequences. https://t.co/INvUmT6M6P

Adding to the list of inexcusable stuff like unapproachable pin placements was the fact that tee times became a huge factor.

The course was much milder in the morning, which partially explains why  Daniel Berger and Tony Finau -- dudes buried on the leaderboard at the start of Round 3 -- wound up carding 66's and becoming the final pairing for Round 4.

Viddy well, because odds are strong they'll have disappeared by the end of tomorrow.

Because actions speak louder than words, though, leave it to noted prison dodger extradordinaire Phil Mickelson to immediately craft a strategy that put an exclamation point on the absurdity:

John Daly must've been so proud.

Ever see video of the Open at Pinehurst in 1999?

Incredibly, this Open actually has leaders after three rounds.

One of them is Dustin Johnson, whose four-pop advantage dissipated when the course finally caught up to him.

The other champion, of course, is the dude currently defending his Open title, Brooks Koepka.

Maybe he made a deal with the devil or something.

Guess that'll be revealed in the final round, unless the USGA decides that one fair 18 is better than none.