Tiger Woods Can Now Say He's the World's No 668 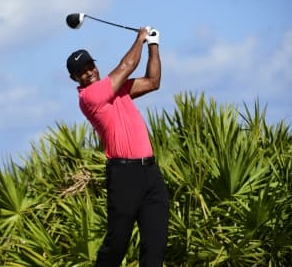 Anyone on the comeback trail's gotta start somewhere.

For Tiger Woods, that was teeing off in the Bahamas last Thu 30 Nov at Spot No 1199 in the Official World Golf Rankings.

By the end of the day on Sun 3 Dec, dude finished tied for ninth in the Hero World Challenge.

Driving a par-4 green and then nailing the eagle putt through the back door. Vintage Tiger, all right.

And what was Rickie Fowler doing during all that Tiger adulation?

As a matter of fact, Fowler's hole-in from the bunker was the top shot of the weekend:

Back to Woods, it seems dude does have reason to be elated.

Swing-wise, though, he was here a year ago.

Of course, it was what that swing was doing to his back that caused another year of rest and rehab.

Bigger challenges await. Woods is 41 now and will be competing with a group of elite hotshots who grew up being inspired by his game and have done a good job of emulating it. Every week.

And now, that's the task this winner of 14 majors has to prove he can handle.